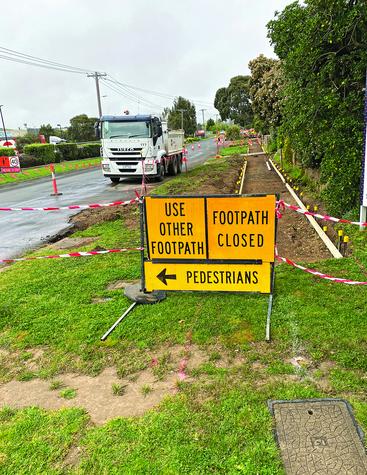 SEVERAL major council road and beautification works across Mitchell Shire are underway or have recently been completed.

Works on Windham Street, Wallan, between William and King streets, have commenced with the aim of transforming the area to support safer movement.

The $620,000 works have put community safety at the forefront with new infrastructure designed to ensure pedestrians can easily travel through the area and that vehicles abide by the speed limit.

The works include: new footpaths on both sides of the road to ensure pedestrian safety and access; new kerbs and drainage to reduce water runoff into properties during heavy downpours; intersection improvements and speed cushions to reduce vehicle speeds; and the reinstatement of road sections, nature strips and line marking.

The work zone will be reduced to 40km/h during construction. The north-bound lane will be closed with a detour established along Bentinck Street.

While there may be some minor delays, traffic will still be able to move through the area.

Mitchell Shire Mayor Rhonda Sanderson said the project would make a significant impact on the rehabilitation of Wallan’s road network and footpath infrastructure.

The project is part of the Wallan Town Centre Revitalisation Project, which is fully funded by the State Government’s Regional Development Victoria.

A new car park for staff and students at Tooborac Primary School is also complete.

The $127,000 development was part of a council commitment to keeping residents and drivers safe on Mitchell Shire’s road network.

The car park has new line markings and the road has been upgraded.

The beautification of Mitchell Shire’s streets will continue with more garden beds set for May.

Seymour’s Anzac Avenue will receive a facelift, with five road islands to receive grass and a number of feature plantings of native shrubs.

The program is part of council’s $50,000 contribution to garden beds in its capital works program.

Cr Sanderson said all the projects would make a difference to their respective communities.“As we head into the cooler months, it is fantastic to see upgrades like those on Wellington Street, Wallan, and Tooborac Primary School Car Park finished up. It is great to see the road islands beautified in line with the updates as well,” she said.

Call for an inclusive Australia Day