Home News Community The Shack is back at Upper Plenty 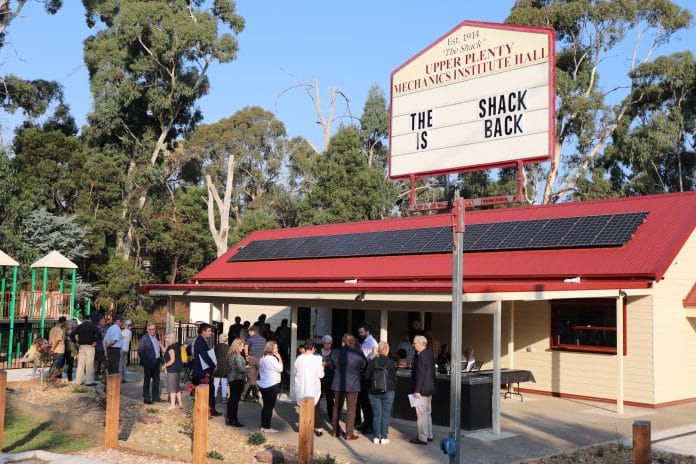 THE Upper Plenty community had a celebration five years in the making last week as it welcomed the reopening of the Upper Plenty Mechanics Institute Hall, known as The Shack.

Much of the small community joined Mitchell Shire Council representatives and Member for McEwen Rob Mitchell to officially reopen the hall, which burnt down in 2015.

The new building stands on the same footprint as the old hall, but Upper Plenty Mechanics Institute Hall Association president Paul Brisden said it came with several upgrades and improvements.

Mr Brisden said The Shack’s committee of management had encountered several obstacles while attempting to rebuild the hall, mainly because the land was controlled by the State Government.

“It has been a long journey, probably a lot longer than what we’d originally thought because of the problems with the land,” he said.

“It’s always been a community feature for events like Christmas, Australia Day and Anzac Day, so we’re looking forward to getting that up and running again.”

Mr Brisden said the committee had to negotiate with the building’s insurer to make modifications to the original design.

“The original Shack had evolved over 104 years, so it was an original small building with a number of additions.

“When we had the opportunity of rebuilding it, the insurers were going to build the same thing, but we said we would like to try to get away with making some small changes, and we were able to negotiate.

“It’s retained the same appearance and we’ve tried to stick to the original, but we’ve got more modern features like air conditioning. Once they saw what we were doing they were very reasonable.”

The Shack was rebuilt largely through insurance money from the original building, as well as a $147,000 contribution from Mitchell Shire Council and money from the Federal Government’s Stronger Communities Programme.

“The Shack has been an important part of the Upper Plenty community for over a century and the community played a crucial part in getting the venue back,” she said.

“Halls such as these are the heart of our small communities. Generations of residents can now use the iconic facility, just like those before them.”

Mr Mitchell said The Shack’s reopening was an ‘absolutely wonderful day’ and the rebuilding process was an example of all levels of government working with the community.

“It’s just one of those things where you can say it’s a whole community effort, from [the Federal Government], the state, council and the community all working together, and the outcome is something we’re proud to see done,” he said.

“It’s been a credit to Paul and all the other members of the community who have worked extremely hard from the tragic start when it was burnt down.

“I’ve been lucky to have been able to watch it, almost from day one, rise up from the ashes, and what we see today is something the community can be so proud of.”