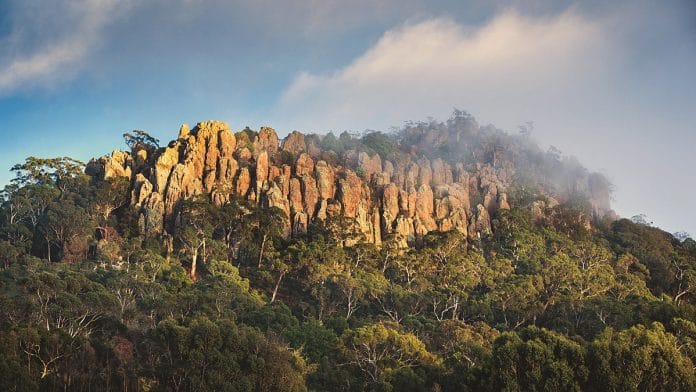 THE future of Hanging Rock East Paddock is at a standstill after the Department of Environment, Land, Water and Planning and Macedon Ranges Shire Council were unable to reach an agreement on the monetary value of the site.

The paddock is currently owned by Macedon Ranges Shire Council after it was purchased from its previous owners in 1990.

The land has become established as a regular concert venue for international artists, including the most recent by Elton John over the Australia Day weekend last year.

In the past four years, council has undertaken several improvements to the site, including but not limited to; north and south pavilions incorporating barbecues, toilets and undercover shelters; gravel roads; and 26 light towers and lamps.

An independent valuer concluded the site was valued at more than $3 million in October 2019.

In 2018 the Hanging Rock Strategic Plan was prepared, and a document developed by DELWP and council.

The future ownership of the East Paddock was an issue raised, as the State Government pledged to purchase the land from council to ‘provide greater protection to the precinct’.

Multiple discussions and meetings subsequently took place between DELWP and council, however no agreement was reached on the valuation of the site.

At its ordinary meeting in May last year, it was recommended council reject an offer made by DELWP to purchase the land, and a report was provided detailing the valuation of the land and reasons behind their unanimous decision.

A valuation conference attended by both council and a Valuer-General Victoria valuer, appointed by DELWP, several valuation differences arose – the most evident being site improvements.

The Valuer-General valuation did not compensate for the improvements with its valuation amount, and council’s valuer argued the assets were beneficial for the recreational use of the site – including as a concert venue and location for public events.

In disagreement, the VGV valuer suggested the improvements were insignificant and maintained they would not include the assets in the valuation – DELWP requested its final valuation of the East Paddock remain confidential.

Council’s valuer did not accept the monetary value made by DELWP as it ‘[did] not adequately reflect the value of the site improvements or the investment council [had] made in the site for future public events’.

The council valuer concluded the value proposed by DELWP was ‘significantly below’ council’s valuation.

At its December meeting last year, council officers provided an update of the sale proceedings and concluded they would continue working with DELWP to ‘negotiate a satisfactory outcome to the proposed transfer of the East Paddock’.

“The Department of Environment, Land, Water and Planning, DELWP, is continuing to work with Macedon Ranges Shire Council in regard to the East Paddock with the aim of protecting the Hanging Rock precinct for current and future generations,” a DELWP spokesperson said.

“The Hanging Rock Strategic Plan guides future use of the Rock and its immediate surrounds for the long term.