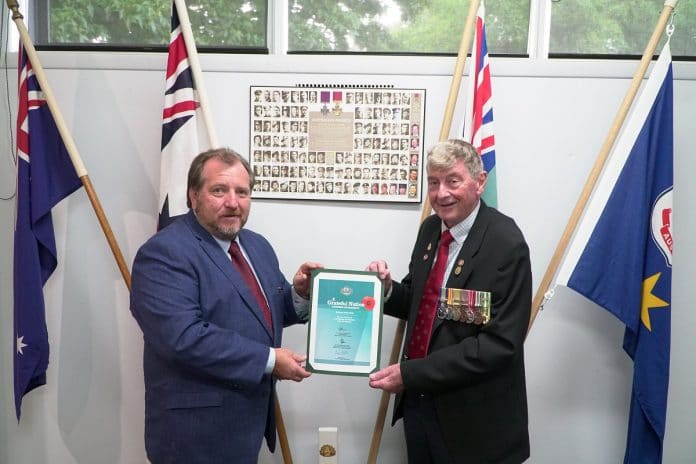 KILMORE Wallan RSL president Rod Dally has the thanks of a grateful nation – and the certificate to prove it.

Mr Dally was honoured by Member for McEwen Rob Mitchell last week with a special award thanking him on behalf of the Federal Government for his service during the Vietnam War.

Mr Mitchell said servicemen and women who took part in the Vietnam War were often treated poorly by the Australian public upon returning, and he wanted to help redress some of the pain they suffered.

“It’s been a big shame on Australia’s history the way Vietnam vets were treated when they came back and it’s something I’ve been very strong on in making sure we do acknowledge and we do support,” he said.

“It was a tough time and I think until Bob Hawke turned around and started trying to fix it, there was some bad treatment of veterans.

“The reality is that these guys did what this nation asked them to do, and they did it well and did it with honour and pride.

“To me it is a huge honour to be able to chat to our vets and appreciate them for something they did.

“It’s something that has been undervalued, and it’s good to have this recognition.”

Mr Dally said his treatment after returning from Vietnam was something he had struggled to come to grips with.

“Until you’ve been there, you can never really understand,” he said.

“I copped it pretty bad my first day back at work after I got out.

“I went into the pub with my work friends and it got pretty nasty because it was obvious where you’d been. That hurt as a veteran.”

Mr Dally was emotional when presented with his certificate and said he was grateful for the recognition.

“On ANZAC Day, I still cry. The Last Post destroys me,” he said.

“I’ve got all these [service medals] but they’re shiny brass things and most people don’t know what they are.

“This I can put on the wall and have it framed, and it’s actually telling me from the government the appreciation that
they have.”

V/Late or not at all