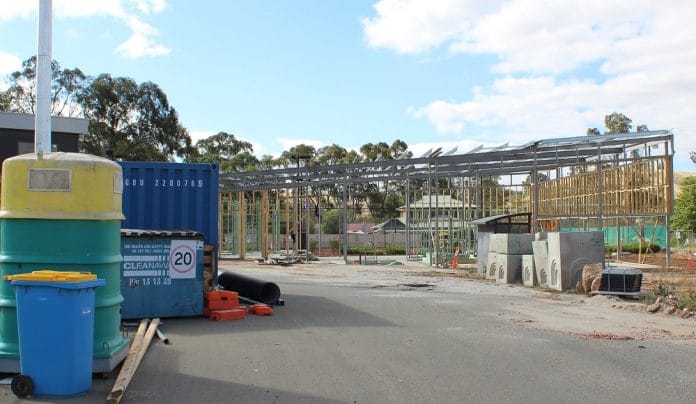 WORK on a shared-use tennis and netball pavilion at Broadford’s Harley Hammond Reserve is due to be completed in June after the COVID-19 pandemic pushed the project behind schedule.

The $2.5 million project has seen the reserve’s former netball and tennis clubrooms torn down, to be replaced with a shared-use facility featuring bathrooms and change rooms.

Two netball courts will be resurfaced and lighting will be installed as part of the works.

Broadford Town Tennis Club secretary Nancy Donohue said tennis players were excited the project was finally advancing after COVID-related delays. The project was initially expected to be finished by the end of March.

“It’ll look really good when it’s finished. It has an admin room and plenty of toilets, and it will look spectacular once they put the garden in,” she said.

“It’s been a bit sad to see our old club go, but we’re looking forward to this.

“Hopefully it will bring new life into the tennis centre. We’re aiming to get a few more members – it will be a great place to come down and have a game of tennis.

“We’re lucky we were able to keep our clay courts, because there aren’t many of them around.”

Broadford Netball Club president Natalie Fletcher said the delay would make for a bumpy start to the upcoming junior netball season, but that the new facilities would be good for players.

“It hasn’t been great timing because our netballers are due to start training next month in preparation for a season commencing in mid-to-late April,” she said.

“We’ve had to move all of our clubrooms and our training and competitions to the stadium. We’ll be operating out of there until everything is complete.

“But the facilities needed to be upgraded without a doubt. Both buildings were riddled with asbestos, and size-wise they weren’t ideal.

“Having change rooms, having a bigger space means we can potentially host fundraising events and have our presentation nights within the pavilion, whereas previously we’ve had to outsource that.

“We’re excited to have a new space and move forward in 2021. We’re looking forward to our teams resuming netball and getting to utilise the new facility.”

Both clubs said they would welcome expressions of interest from prospective players, umpires and volunteers.