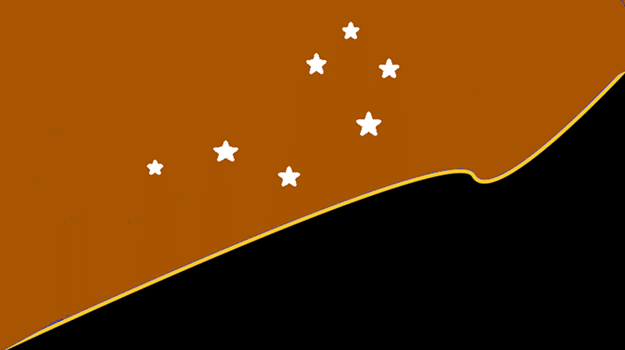 TAUNGURUNG Land and Waters Council has a proud new symbol of its cultural sovereignty.
The group last month announced it had adopted a new flag, designed by Taungurung woman Loraine Padgham, as its official emblem.

The land council is a registered Aboriginal party that represents the interests of the Taungurung people under the Aboriginal Heritage Act 2006 by protecting Aboriginal cultural heritage in its area.

Taungurung country covers an area from Kilmore, Kinglake and Marysville in the south to Mount Buffalo in the north-east and the Campaspe River in the west.

Ms Padgham’s flag design was selected after a competition invited Taungurung people to submit their own designs for a sovereign flag.

A total of 36 designs were submitted, with a sub-committee of the land council board whittling the entries down to a shortlist of four.

Ms Padgham’s winning design netted her a $10,000 first prize, with shortlisted designs from Sammy Trist, Maddi Moser and Karin McMillan winning them $1000 each.

Chief executive Matthew Burns described the unveiling of the group’s flag as ‘an historic development’.

“The flag will convey meaning related to our country and culture – a flag that is striking and powerful, creative and uncomplicated, and that instils a sense of pride and identity,” he said.

“The artist, Loraine Padgham, is a proud Taungurung woman who has contributed greatly to our community – especially in relation to matters of language, culture and history.

“Her flag design is inspired and she is a worthy recipient of the $10,000 prize.”

Ms Padgham said she was humbled and honoured that her design was chosen to represent the Taungurung people.

“Over the past decades, the Taungurung people have reclaimed their identity and rightful place in the history of Victoria,” she said.

“I hope it [the flag] will grow to symbolise the difficulties experienced by past generations and the opportunities that arise for the future generations.”

The announcement comes at a time when the use of the Aboriginal flag has become embroiled in legal battles.

Chairman Grant Hansen said the group was conscious of avoiding a similar scenario and had ensured the Taungurung flag would remain theirs for future generations.

He said in a climate where the Aboriginal flag had been brought into disrepute, it presented an opportunity for Taungurung people to identify as a sovereign nation.

“Having your own flag for your own Indigenous nation is becoming the norm across the world instilling cultural pride in our identity,” he said.

“The flag brings together all people within the central Victorian highlands and the Taungurung clans. It is an exciting concept to be embraced by all.”

Mr Hansen said the use of the Taungurung flag would be a key part of a growing movement to strengthen the visibility of Australia’s First Peoples.

He said the flag was a positive way to educate Australia on the importance of First Nations’ culture and help ensure Aboriginal heritage was celebrated.

The flag will be displayed for the first time at a celebration ceremony as soon as COVID-19 restrictions are lifted.