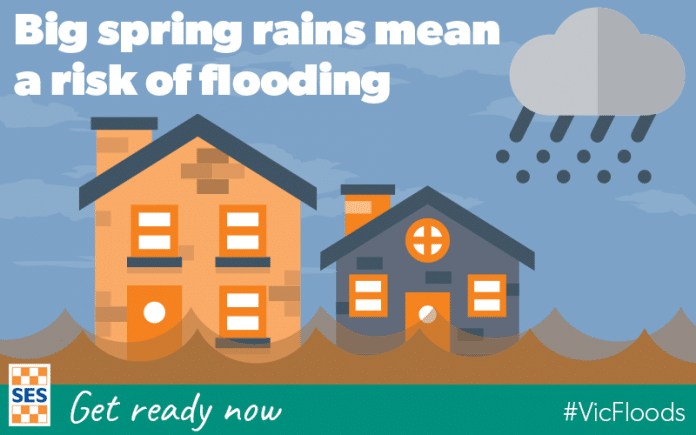 THE Victoria State Emergency Service, VICSES, has called for people to be flood ready as a potentially wet spring arrives.

The Bureau of Meteorology recently released data indicating La Niña weather was likely to bring heavy spring rains and a higher risk of floods in parts of Victoria.

VICSES officials said the service’s north east region, which encompasses Mitchell Shire and stretches east and north to the Murray River, was particularly susceptible to flooding.

Mr Payn said people could find simple steps for getting flood ready on the VICSES website.

“Flood risk from late September into October gives us some time to get flood ready, to find out the flood risk for our homes, farms and businesses right across the North East region,” he said.

“Some areas are prone to less predictable and very dangerous flash flooding, which can happen quickly and with little warning, like homes on high ground and freeways.

“Flash floods can be very deep, rise quickly and move fast, so you need to keep away from trees, drains, culverts and stay off the road during flash flooding to keep you and your family safe.

“Leaving early is always the safest flood option, so planning to move people, animals and equipment to that safer place needs to be worked out now – not when floodwater is already rising.”

“Mitchell Shire and our unit are getting together very shortly to start putting out some information for people,” she said.

“SES has already got a heap of information and we’re looking at posting something at least once a week to let people know to clean out their gutters and things like that.”

Ms Welsh said the Seymour area was particularly at risk of flooding, and said people needed to be aware of areas where roads could flood.

“Places like Deltite Road, Sugarloaf Creek and Ashes Bridge Road are all at risk of flooding,” she said.

“We’ve got the Goulburn River, we’ve got Sunday Creek, we’ve got Whiteheads Creek – we’ve got quite a few creeks and rivers that meet around the Seymour area.

“If one floods it’s not too bad, but if they all come up at the same time that’s when we tend to have the majority of our issues.”

Ms Welsh said there were several simple steps people could take to get flood ready.

“It’s also important to be aware that with a potential La Niña alert and the Indian Ocean dipole being in negative, the last time that happened was 2010-11, and we got a lot of flooding in that time,” she said.

“With rain and storms, make sure your gutters are cleaned out so the water doesn’t build up in your gutters and go inside your house – that’s a big one.

“Make sure things are tied down in storms, and don’t drive through flood water – that’s always bad.