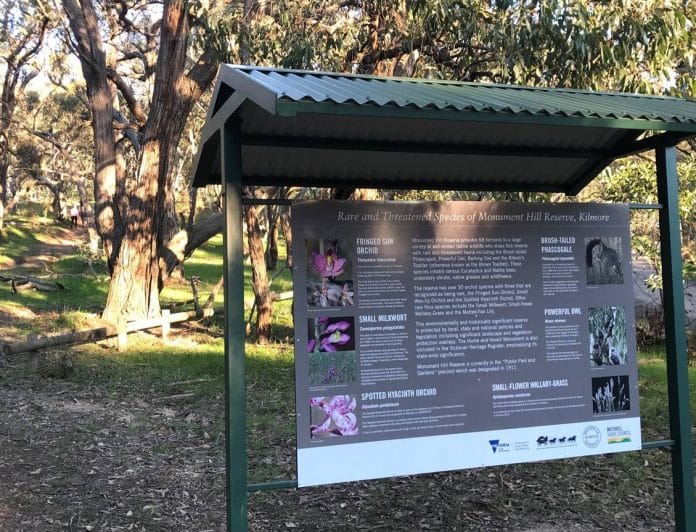 HOURS of searching and recording rare and threatened species at Kilmore’s Monument Hill has paid off for two community groups that worked together to erect a sign to inform the public.

Kilmore Mechanics Institute and Free Library and Kilmore District Residents and Ratepayers Association received a grant from the Department of Environment, Land, Water and Planning, which they used to support their mission.

The groups set up several motion-activated cameras to note the nocturnal animals’ movement and locations.

They also worked together to build nesting boxes for phascogales, barking and powerful owls, as well as wire surrounds to protect rare flora species.

The flora species include more than 30 orchids, all living in the Monument Hill reserve, protected by local, state and national policies and legislation – including significant landscape and vegetations protection overlays.

To inform member of the public who walk, ride or drive along the tracks the group installed a sign, which depicts four flora and two faunae and descriptions of each one.

KADRRA member Vyvienne Whitehurst said the size of the sign meant not all threatened species could be listed.

“The sign is located in the second car park where Monument Hill Road begins its ascent and where several tracks and paths lead into the reserve and up to the monument,” she said.

“If you are in the Kilmore area it is well worth the trip up to our Hume and Hovell Monument.

“Upon taking a quiet walk in the bush you will be surprised at how many wildflowers, orchids and native animals you will see, and, if you’re lucky, a phascogale or a rare orchid.

“Hume and Hovell’s Monument Hill is currently in Kilmore’s Public Parks and Gardens precinct which was designated as such in 1911.

“Our thanks to the Victorian Government, Mitchell Shire Council and the many local volunteers for their assistance.”

Newham family devastated and left in the dark after fatal shooting...