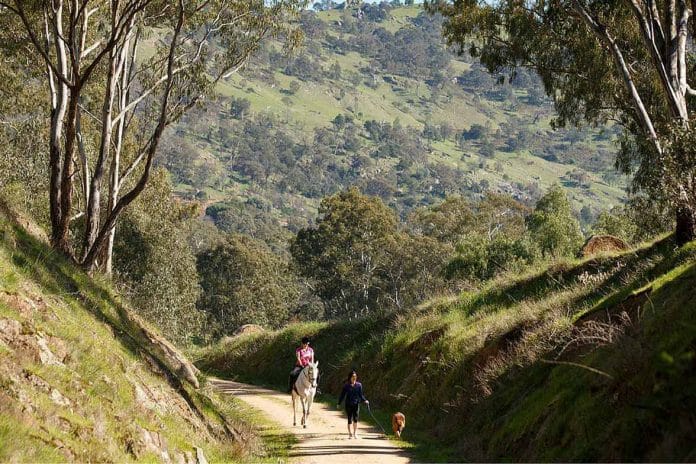 As part of the Great Victorian Rail Trail Strategic Development Plan, the three councils will increase expenditure to about $1.7 million over three years.

The investment is expected to deliver an increase in visitor spend worth $8.6 million.

As Mitchell Shire has the shortest length of trail of all three councils, its investment is expected to be roughly proportionate to its section of the trail.

The 134-kilometre walking, cycling and horse-riding trail stretches from Tallarook to Mansfield, with a spur running from Cathkin to Alexandra, and attracts 74,000 visitors per year.

The plan was created to guide the three councils in transitioning the trail from an asset to a ‘signature tourism experience’.

It outlines four themes to deliver the goals, including improving the trail experience with storytelling, art installations, signs, digital wayfinding and engagement, and extending the trail between Tallarook and Seymour.

Part of the plan includes leveraging the proximity of the rail trail’s start point in Tallarook to the neighbouring Hume Freeway and V/Line station to boost visitation and use from Melburnians.

While the Great Victorian Rail Trail attracts tens of thousands of visitors every year, benchmarking against other trails in Victoria found it captures a substantially lower number of visitors than other trails.

Despite being the longest trail in Victoria, the Great Victorian Rail Trail attracts more than 200,000 less users than the Murray to Mountains Rail Trail.

At the August council meeting, north ward councillor Rhonda Sanderson said Mitchell Shire was lucky to have a fantastic range of attractions across the shire but council could not sit on its laurels.

“We need to have plans in place to continually improve them, keep them relevant and fit for purpose and to increase our visitor numbers and support local jobs,” she said.

“At a time when COVID-19 has lots more people outside walking, cycling and horse riding to get a bit of fresh air and exercise, a wonderful asset such as the Great Victorian Rail Trail gains more prominence.

“We need to ensure, as stewards of the trail, that we continue to maintain and improve it and I think this plan can go a long way towards that.”

“From a Mitchell perspective, starting at Tallarook, it’s the closest town to Melbourne and has a train station so people can bring their bikes up, arrive at Tallarook and take off from there,” he said.