The mother of William Callaghan, who was missing at Mt Disappointment State Forest for 46 hours, has thanked the hundreds of people who helped search for her teenage son.

William, known as Will, was found alive at about lunchtime today after walking ahead of his family at Mt Disappointment on Monday.

Will has autism and is non-verbal. He did not have food or water with him, and was not dressed for the elements where temperatures dropped to about zero degrees.

Will’s mother Penny Callaghan said she was relieved and overwhelmed after being reunited with her son.

The first thing Will asked for was to eat McDonald’s food.

“He’s well, as well as can be expected under the circumstances. He’s quite calm considering,” he said.

Will used a communication app called Proloquo2Go to tell his mother and stepfather that he was confused and scared and that his “body feels weird”.

Ms Callaghan said she couldn’t believe it when she heard the news that he had been found safely.

“I can’t imagine what he’s been feeling and going through and I’m just so grateful and so relieved,” she said.

“He’s just a very special person and all the people in his life, they love him to bits.

“There are some amazing sides to autism. As I said earlier, it is hard but he’s just so special and we’re so privileged to have him in our lives.

“I’d like to take him on a holiday, I think. His first request was McDonald’s. I think he wanted hot, salty food.”

Ms Callaghan thanked everyone involved in William’s rescue, which at one point saw more than 450 people searching for him.

“More than anything, thank you everyone. I’m so grateful, you’re all amazing. What an amazing community,” she said.

“I want to thank Ben [Gibbs]. I think William might be wearing Ben’s jacket so I need to return that to him.”

Mr Gibbs, from Research, said he knew the mountain well and found Will about 1.5 kilometres, or a 20-minute walk, from the main track.

He said he had seen tags of where other search teams had previously looked but decided to go off the track and deeper into the bush.

“I was just wandering through the bush and then he was just 15 metres from me just standing there. He was really angelic,” he said.

“I heard that he liked Thomas the Tank Engine so I talked to him about Diesel.

“He looked in reasonable health, he wasn’t shivering too bad. He didn’t have socks on so I put some socks on him and a jacket and gave him some chocolate.” 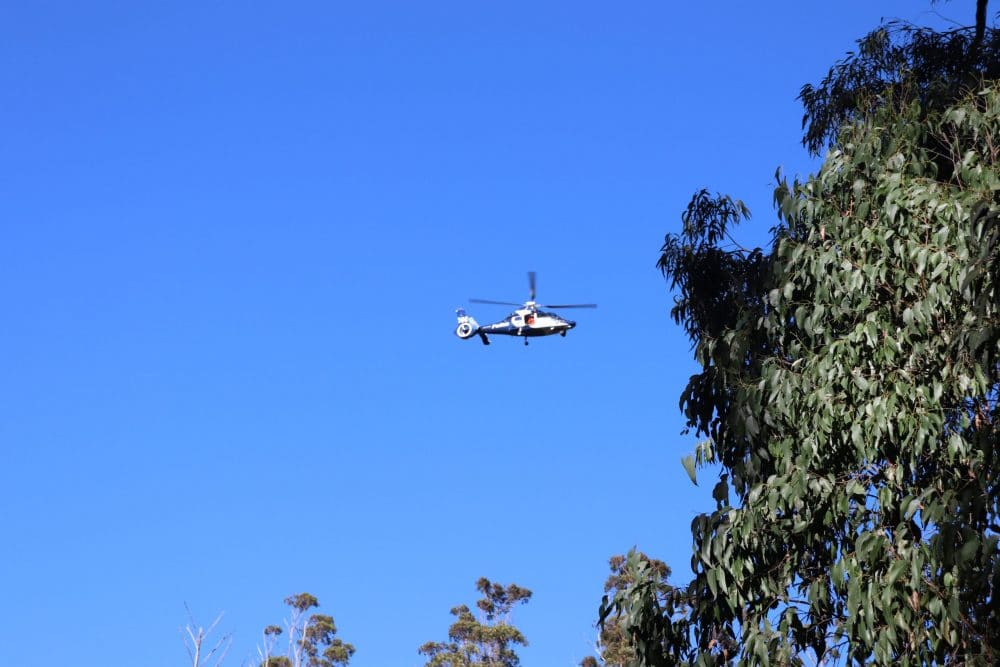 Rescuers were smiling and hugging as news filtered back to the police command post at Blair’s Hut.

Will has been missing nearly 48 hours, including two bitterly cold nights in the bush.

A team of more than 450 emergency services personnel and volunteers have spent the past two days and nights searching the Mt Disappointment area.

This morning, Ms Callaghan, of Drysdale, had told media the family was desperately hoping he would be found today.

“He’s very smart in his own way, you know. I’m feeling positive because he is quite resilient,” she said.

“He is very skinny… But he eats all the time, he’s always be on the move, he’s very active. He’s quite fit, he’s not a great sleeper so that may be good for him in this instance.”

Fighting back tears, Ms Callaghan said Will was a beautiful person who wouldn’t harm a fly.

She thanked everyone involved in the operation.

“So many volunteers… the Salvation Army catering the SES, everyone is just amazing and I’ve met so many people who have just inspired me in so many ways,” she said.

Ms Callaghan said any parent would be thinking worst case scenario but she would not allow herself to do that and was looking forward to seeing her son.

“He loves tic tacs, so I want to give him a million tic tacs,” she said.

“I often use it to reinforce his behaviour and now I just want to give him all the things that he loves.”