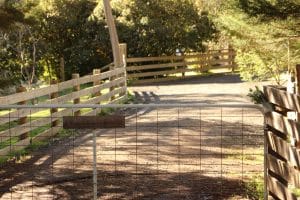 Flowers were left at the front of property in Tyaak where a house fire on Saturday night claimed the lives of three people.

Three people, including a child, have died in a house fire at Tyaak, near Broadford, on Saturday night.

Police had reported on Sunday the 34-year-old man died, but then issued a correction saying the man was still alive and in a critical condition. He eventually died late Sunday afternoon.

Emergency services were called to the house fire in Cunninghams Road close to 11.40pm.

Most other occupants of the house were taken to hospital with injuries.

Police believe the group of people were staying at a holiday property where the fire broke out.

Circumstances surrounding the fire are yet to be determined.

Police and other emergency services have established a crime scene.

The investigation is ongoing while police and Arson and Explosives Squad detectives remain on scene.

Anyone with information regarding the circumstances of the fire are urged to contact Crime Stoppers on 1800 333 000 or submit a confidential report online at www.crimestoppersvic.com.au.