Dulux’s Merrifield factory in Mickleham is aiming to improve the safety of staff during the COVID-19 pandemic by installing thermal cameras at its entrance to check the temperature of every person who enters the facility.

Initially, visitors were having their temperature measured with an infrared thermometer upon entry while staff were read once a week, which created a risk for the staff charged with taking temperatures. 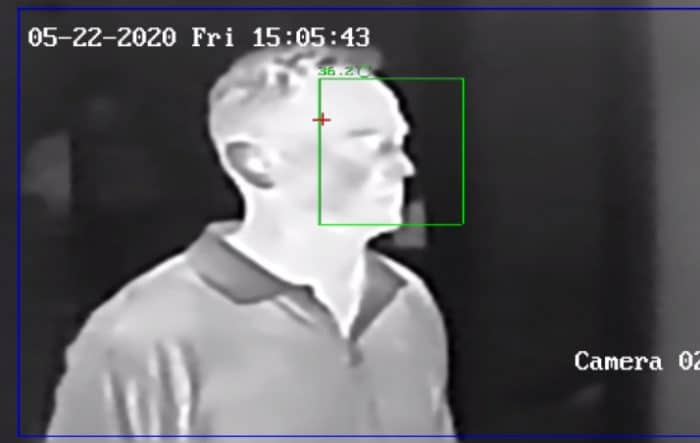 Dulux Merrifield operations manager David King said from the start of the outbreak, the business had put in place measures to protect staff and avoid shut downs.

The new cameras are now installed at the entrance to the factory, measuring the temperature of every person that enters – with the results displayed on a monitor at reception.

In a bid to be open and transparent about the temperature checking, Dulux has installed signs, and staff also inform visitors they have had their temperature taken.

The system currently works on a universal baseline temperature – the next step for Dulux Merrifield is the introduction of facial recognition technology to keep track of individual temperatures and identify any spikes from their base temperature.

The facial recognition feature averages each person’s temperature over time, which means it can alert at as little as half a degree temperature increase per individual.

IT director Michael Brown said temperatures could fluctuate an entire degree between individuals and depends on the time of day and environmental factors.

“A person on the low side of normal needs a markedly bigger increase in temperature to be alerted than someone who is on the higher side of normal,” he said.

“For the guys trying to manage the business, anyone who is on the high side of normal, they only need a tiny little increase which could be an environmental reason, like being outside in the hot sun, and then they’ve triggered an alarm that management have to waste time following up.”

While the onsite server uses facial recognition to help solve the challenges, the matching only occurs onsite and not in the cloud.

The hands-off thermal camera logs temperatures as personnel walk past, alerting via email and push notification on raised temperatures relative to each person’s average.

Similar systems have been employed at airports and train stations across Asia for some time, but more and more Australian businesses are installing the technology.

Mr King said the business had always planned to use the facial recognition technology and had the full backing of staff.

“It’s literally just if it sets off, it takes a photo and that’s the data we use,” he said.

“We’re making sure everybody gets that reassurance that that’s what it does. We’re not trying to hide anything.

“We have 20-plus trucks arriving every day. Those drivers, we don’t know where they’ve been or who they’ve been in contact with, so every truck driver that comes through the front door, we know the truck driver at least hasn’t got a fever before he goes and interacts with anyone else on-site.”