Two of the region’s producers have been honoured in the 2020 delicious Produce Awards for their farm-to-table goods.

Clonbinane’s Warialda Belted Galloways and Tooborac’s McIvor Farm Foods were both named state winners in the paddock category for their grass-fed beef and free range pork, respectively, and will progress to the national judging phase.

Warialda Belted Galloways started in 1980 with owners Lizette and Allen Snaith choosing the Belted Galloway breed to differ from the farms producing Angus and Hereford beef.

“[Allen] liked the look of them, same reason as anyone would want to buy a dog basically, you like them, there’s traits about them that you like or whatever so he used the same principles,” she said.

Belted Galloway cattle have a distinctive white belt around their midsection, take longer to mature than traditional breeds and have a gene that promotes marbling within the meat, much like wagyu.

“For us it’s a point of difference,” Ms Snaith said.

“We feel like the meat itself, because it takes quite a long time for the animals to mature… it just develops the flavour and being grass-fed as well, it’s just a bigger flavour.

“Our beef is like the equivalent of having a tomato that’s grown out of old, Italian grandpa genetics in the sun and ripened on the vine as opposed to the supermarket version.” 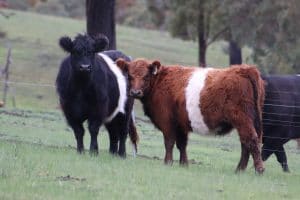 Ms Snaith said it was great to receive the acknowledgement from the delicious Produce Awards.

“Any sort of acknowledgement of what you do in a sphere as wide and as broad as the produce awards is amazing and we’ve been consistently there for a long time and that is even better,” she said.

“It’s just acknowledgement of what we do and it just encourages us more I think.”

“It’s from a Berkshire pig which is renowned for its clean white fat, marbling in the meat and crackling.

“Over the years we’ve been able to deliver a consistent product and that’s what restaurants are looking for.

“To be able to put it on their menu, they need to have a consistent product and be confident the portions are going to be similar to all the time and not go from a good size one week to all fat and no meat the next.”

While Warialda Belted Galloways’ beef was a feature of several farmers markets across Victoria, attending eight markets a month, the business was forced to move online through the Open Food Network in the wake of the COVID-19 pandemic.

Ms Snaith said going from 80 per cent of sales from farmers markets to 100 per cent online presented many challenges.

“Our van has gone out today, we’ve employed a local girl to do the driving because I couldn’t keep up with it all and we work with McIvor Farm Foods.

“A lot of the farmers markets that we go to, [McIvor Farm Foods owners] Belinda and Jason Hagan go to as well, we’ve known them for a long time so we decided we would do this together.”

While Warialda Belted Galloways returned to Lancefield Farmers Market on Saturday, they plan to keep the online business going.

“It’s opened up another avenue of customers,” Ms Snaith said.

Mr Hagan described the move to an online business as a ‘whirlwind’.

“We had to adapt our business plan – turn it on its head, really – in two weeks,” he said.

“We’ve teamed up with Warialda Belted Galloways to offer the same pork, maybe even more cuts than before because we’re not serving restaurants at the moment.

“We’d like to thank all our customers. We’ve got regular customers we had prior to COVID-19 but we have gained some new customers so it’s very pleasing to see that we can still attract new customers.”