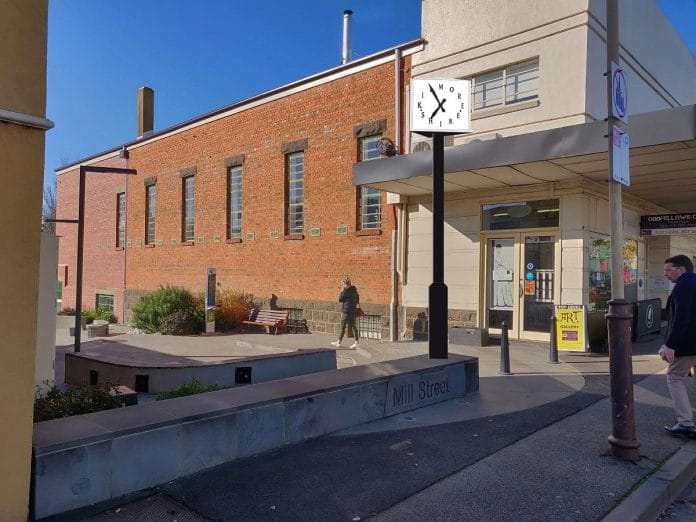 KILMORE residents can now look forward to a new street decoration to admire with plans to install the Kilmore Clock at the Mill Street mall precinct, near Oddfellows Cafe on Sydney Street.

The Rotary Club of Southern Mitchell aims to create or install infrastructure in communities which make towns and suburbs a more pleasant place to live.

Club member Rose King said the Kilmore Clock was something the volunteer group had wanted to see in Kilmore for many years.

“Our first proposal was a clock tower erected at the front of the Commonwealth Bank carpark, however, VicRoads determined it would be a visual distraction which could be hazardous for drivers,” Ms King said.

“This was to be funded by a $4000 community investment grant from Bendigo Bank, an $8000 Federal Government Grant for Stronger Communities and the remaining funds would be raised by the club.

“However, due to unavoidable delays the clock project did not come to fruition within the expected time-frame, and the cost of importation just kept going up.”

Being unable to import the clock as they had expected, the club abandoned the project.

Ms King said in the meanwhile, in 2015, a 1950s era Kilmore Town Hall clock was revived from a former Kilmore Shire depot, and as a member of both the Rotary Club and the Kilmore Historical Society, she was aware of the finding.

“I was aware of the existence of this clock and proposed to the Rotary Club we pay for restoration and installation of this clock,” she said.

“Because of my connection to both groups I was then appointed to manage the project, along with Bruce Nichols, another member of Rotary. We discussed the change of clock with council which they were agreeable to allow.

“To date, the clock has been completely restored by Vivian Kenney and is currently with One Off Engineering Kilmore who are manufacturing the pole.”

The group hope for the clock to be installed at its new Mill Street home within the next few months; however it will most likely be delayed due to the coronavirus pandemic.