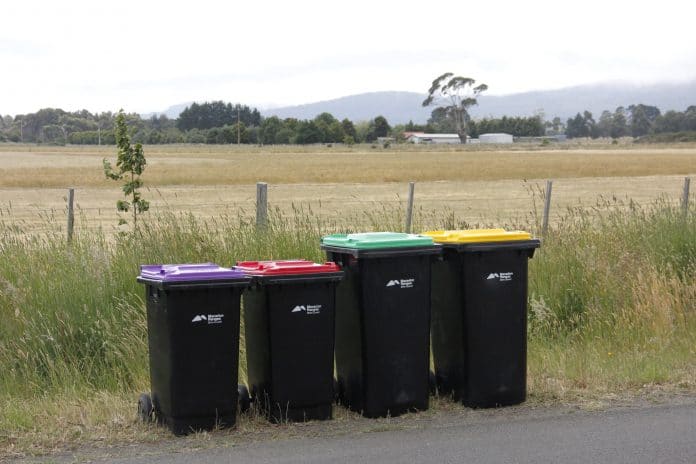 Councils are waiting for more detail on the cost impacts following the State Government’s announcement last week that it would introduce a new four-bin kerbside waste and recycling system.

Premier Daniel Andrews announced a $129 million program to introduce a container deposit scheme by 2023 and the four-bin kerbside recycling system.

Details of the container deposit scheme are yet to be revealed, but Mr Andrews said extra bins would be paid for as part of the $129 million overhaul.

Macedon Ranges Shire Council is one of the few councils who have already adopted the four-bin system, where residents have a bin for general waste, recycling, food organics and garden waste and the new glass bin.

According to Infrastructure Victoria, broken glass is among the biggest contaminants in the recycling stream.

All residents in Macedon Ranges who receive the kerbside collection service have been provided with the glass-only bins, meaning about 20,000 new purple lidded bins have been distributed.

Council’s assets and operations director Shane Walden said their council had been leading the way with its approach to reducing waste to landfill by implementing the new system.

“This has ensured we can minimise the amount of waste going to landfill and reduce harmful greenhouse gas emissions,” Mr Walden said.

Although the cost of the purple bins are covered, it’s still unclear how much the collection services will cost councils and ratepayers.

Mitchell Shire Council acting chief executive Mary Agostino said the shire was keen to know how they would be supported by the government in implementing such a program.

“It is essential that the Victorian Government provide councils with funding and implementation support to keep costs low for our households and to ensure the program is rolled out successfully,” Ms Agostino said.

“The State Government will also increase the cost to councils for waste taken to landfill over the next three years.

“Right now, we are paying about $33.03 per tonne of municipal waste sent to landfill in Mitchell Shire. The proposed changes will see this fee double.

“Traditionally, waste services attract a charge which is based on the service delivery costs. Increasing kerbside delivery may lead to cost increases to residents.”
City of Whittlesea welcomed the government’s initiative, saying they had been lobbying for changes.

“The City of Whittlesea has been lobbying for changes to the recycling system and has adopted this as one of its top advocacy priorities,” spokesman Dean Jenkins said.

City of Whittlesea will start rolling out their food organics and garden waste service in July.

Goranwarrabul House at Seymour Health celebrates 10 years with exhibition and...