APPRENTICE jockey Kiran Quilty is already racing against senior jockeys as she completed her first round of official races in Warrnambool, Sale and Wangaratta last week.

The 18-year-old grew up in Broadford and recently moved to the Mornington Peninsula to follow her dreams of being a jockey, and hopefully one day race in the Melbourne Cup. 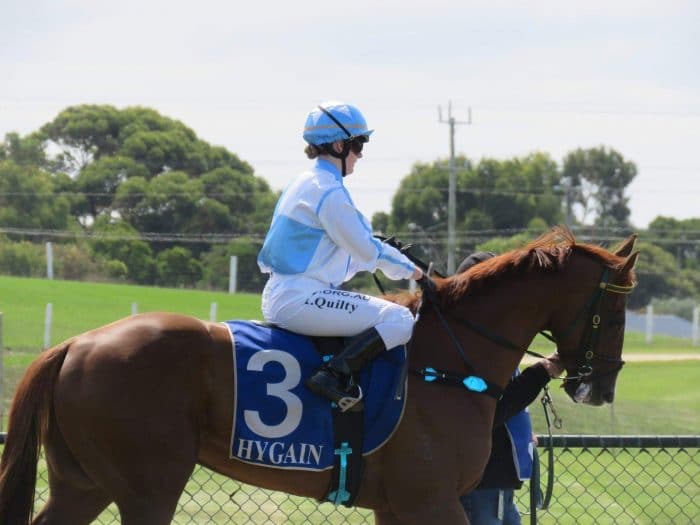 “Dad’s a jockey too and taught me everything I know.”

Quilty moved south to train at the Mornington racecourse and train with expert Shane Nichols.

“There’s a lot of opportunities there. I train every morning at 3.30am, a lot of hard work goes into it,” she said.

“In the afternoons I usually go to the gym and practice on the mechanical horse.”

The apprentice started in the racing industry aged 14 and along the way has faced her fair share of injuries and tumbles as part of the job.

“I’ve had so many falls – I previously had a shoulder reconstruction and was out for seven months,” Quilty said.

“It’s all part of the game and I’m lucky I haven’t had any serious injuries.”

The apprentice and her father Cameron Quilty also had a brush with fame, racing horses on the set of ‘Ride like a Girl’- a movie about jockey Michelle Payne who was the first female jockey to win Melbourne Cup.

“Dad got a speaking role, which was pretty exciting,” Kiran said.

“The dream is to get to the Melbourne Cup one day, we’ll see how I go.”

New acquisition does it for Kilmore horse trainer