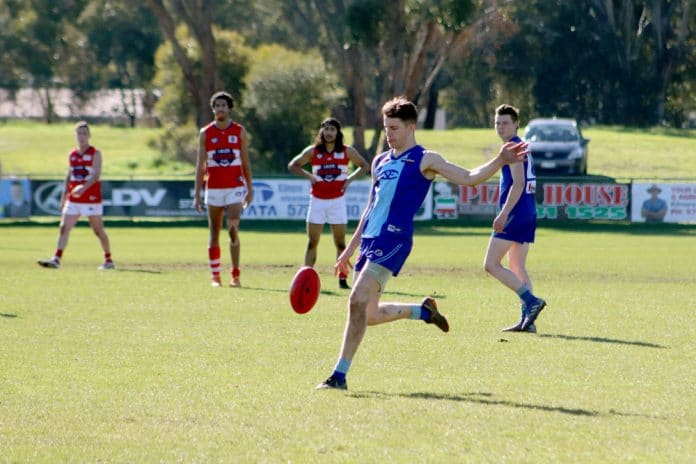 The Blues’ 2020 football recruiting class is headlined by two former juniors in Mick Marrett and Chris Jackson who are joined by Shannon McLeish.

Marrett returns to Kilmore after a couple years at Girgarre in the Kyabram District Football Netball League, coming fifth in their best and fairest while Jackson played nearly 50 senior games with Seymour in the Goulburn Valley League before coming home and McLeish comes up the hill from Wallan.

President Paul Maher said all three are bigger-bodied midfielders, which is something the club needed to complement the skilful young players on its list.

“Mick and Chris both come back to the club as one point players. Part of our philosophy is to recruit previous juniors and to build from within and we’re doing that at the moment,” he said.

The additions help fill a gap left by the retirement of captain Ben Tsakmakis.

Taking the helm for the Blues in 2020 will be Adam Milne and Leigh Irons as co-captains.

Maher said after making the finals in 2019, a passing grade for the Blues’ seniors would be to win a final but said there’s no reason they can’t win a premiership.

“We’ve got the team to do it. We’ve recruited strongly, we’ve got great juniors coming up so there’s no reason we can’t win a flag this year,” he said.

The build from within philosophy is paying off for Kilmore with the return of the club’s under 19s team.

The returning thirds will be coached by Paul Derrick, who has come to the club after some time at Mernda and Roxburgh Park to coach his twin boys in the under 19s.

Maher said there are some fantastic young players coming into the under 19s.

“Kye Maher, Max Lacorcia and Jaden Smith are three highly talented under 17s that are coming up into the under 19s and we’re expecting them to play senior football during the season as well,” he said.

They’ll be joined by Calder Cannons listed player Josh Eyre, who will be eligible to play for the Blues when not selected by the Cannons.

On the netball side of things, the club’s recruited just as strongly and will field seven netball teams.

“We have Kristy Bandy and Lisa Mandanici, as co-coaches and they basically run the netball arm of the club. They’ve done a brilliant job,” Maher said.

“It just shows we’ve built a strong foundation and we’re attracting footballers and netballers to the club.”

Other new additions to the club are new AFL match standard lights, which will see some Friday night games for the under 19s and potentially some twilight games for the seniors, and a new video scoreboard at JJ Clancy Reserve.

“It’s shaping up to be a great year for the Kilmore Football Netball Club and we’re looking forward to it,” Maher said.