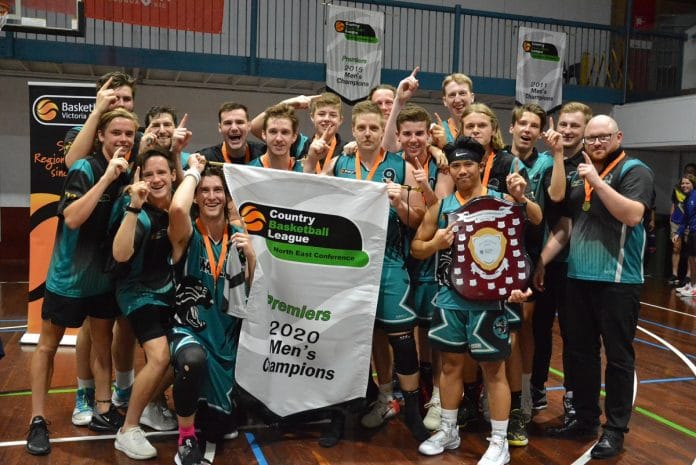 Wallan Panthers finally have their first senior championship, after a 77-65 win over Seymour Blasters in the Country Basketball League North East grand final in Wodonga on Saturday night.

Much like the semi-final, the Panthers started slow and trailed by eight points with a minute left in the first period before finishing the quarter four points behind.

It was all Blasters in the second quarter, with the Panthers trailing by 12 at the two minute mark of the second.

Again, the Panthers rallied before half-time and were able to get to the free throw line to close the gap.

Wallan’s ability to get to the line was one of the keys to the Panthers’ win, outscoring Seymour 28-10 from the charity stripe.

The Panthers still trailed for much of the third, but never allowed the game to get out of hand.

Even down by nine points at the seven-minute mark of the third, big shots from Luke Liesegang and Max Viitala brought the margin back to three points.

Seymour was still able to pull away thanks to a big three-point shot from Jack Murphy at the buzzer.

The two sides traded buckets throughout the final period until Wallan hit the lead for the first time since it was 2-0 in the opening minutes on the back to Max Viitala free throws with 7:05 left to play.

Seymour wrestled the lead back with some big shots and were up by four points with four minutes left to play.

Five straight points from Liesegang gave the Panthers the lead back with under three minutes left on the clock, followed by big shots from Max and Leo Viitala.

The Panthers had momentum behind them for the first time all night and capitalised, outscoring Seymour 21-5 in the final four minutes as Leo Viitala put the game away with seven points in the final minute.

Wallan coach Tim Annett said the Panthers weren’t able to get out on the fast break until late in the fourth.

“To Seymour’s credit, for 95 per cent of the game they were the better team,” he said.

“They played their style and we knew they would come out hard but to our credit, in the last seven or eight minutes, we were able to get our game going and run over the top of them.

“Our strength is getting out on fast breaks and Seymour were making shots so we couldn’t get that going ‘til the last five minutes.”

Liesegang was named the game’s Most Valuable Player, scoring 23 points while league MVP

Max Viitala dropped 22 points and brother Leo Viitala had 20 and was named in the league’s All-Star Five.

“Max and Leo have been huge, on the court and off the court too, with their leadership qualities,” Annett said.

“A lot of the guys look up to them and they brought the group together, making my job a lot easier.

“Luke was huge on the weekend. I think his rebounding has really picked up since last season, he’s gone to whole new level and to have him inside makes everyone else’s job a whole lot easier.

“I think we felt a little bit of the pressure going into the game being undefeated.

“Being the first team to win a championship can build a really good base and set up the future of basketball in Wallan and hopefully this is just the start of the success.”

“Ten years as president yearning for this moment, it was quite the bus ride home and I had the giant banner hanging in my house all weekend,” he said.