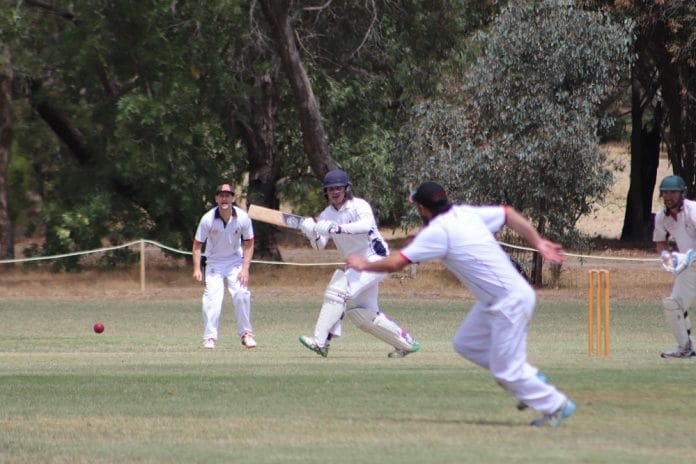 Yea has taken a first innings lead in day one its top-of-the-table Seymour District Cricket Association clash against Tallarook on Saturday.

Playing at Tallarook, the visitors won the toss and elected to bat but were unable to last even half of the day, bowled out for 75 from just 37.3 overs.

Tallarook was in a world of trouble early, with opener Mitchell Itter run out for a duck and Jac Smith-Williams departing in the same manner for just four runs shortly after.

Opener Adam Howard was bowled by Andrew Chisholm for nine runs with Tallarook just 3/31, triggering a middle-order collapse with the visitors losing 4/2.

Wicketkeeper Cameron Muir was the only Tallarook batsman to put any significant runs on the board, making 29 before becoming the third of Chisholm’s four scalps for the day as the visitors fell to 9/75.

Chisholm ended the innings with figures of 4/18 from 8.3 overs with two maidens while Corey Malcolm took 2/10 from eight overs with four maidens.

With half a day left, Yea was able to nab first innings honours and has enough time this Saturday to push for an outright win after making 7/82 from 36 overs.

Tallarook stuck early, with Nathan Beattie stumped by Muir off the bowling of captain Lachlan Watts, to have the hosts at 1/8.

Yea was able to get a solid second-wicket partnership going as Damon Malcolm (11) and Cameron Armstrong (35) put 32 runs on the board together before Leigh Irving dismissed Malcolm caught behind.

Kilmore are up against it after it was bowled out for 169 at home on day one against Broadford.

Opener Kevin Craddock (25) and Marcus Davern (20) combined for a 34-run partnership before Davern was run out.

Craddock and Bailey Dennehy (41) put together a 45-run partnership before Craddock fell at 4/92, leading Kilmore to fall to 7/100 after Dennehy was caught by Braden Hickey off Taylor Shell’s bowling.

Shell tore through Kilmore’s batsmen, taking 4/19 from 12 overs with five maidens, while Jeremy Bradshaw took 3/32 from 14 overs with four maidens.

Kilmore’s lower order was able to get some runs on the board as captain Matt Rose (29*) guided his side through its final three partnerships.

Broadford was able to get a head start on its run chase, getting eight overs in before stumps and making 21 without loss.

Rose said his side would’ve like to have a few more runs on the board.

“It was a good pitch and the outfield was quick so we wanted over 200. Having said that, if we bowl and field well next week, we’re a big chance of taking the 10 wickets,” he said.

“Bailey batted really well, it was certainly his best innings for the year and he played some really nice shots.

“We lost three wickets in 10 minutes just before tea and that really changed the momentum of the game.

“There were half a dozen who’d like the ball they went out to again but Broadford also bowled and fielded well which we’ll also need to do this weekend if we’d like the points.”

Eastern Hill is looking likely for an outright win after bowling out Seymour for 71 at Kings Park on Saturday.

Eastern Hill was able to get the job done in just 40 overs.

The hosts followed up and made 1/54 before stumps was called after 28 overs.

Romsey cricket left with work to do

Laurimar stopped in its tracks