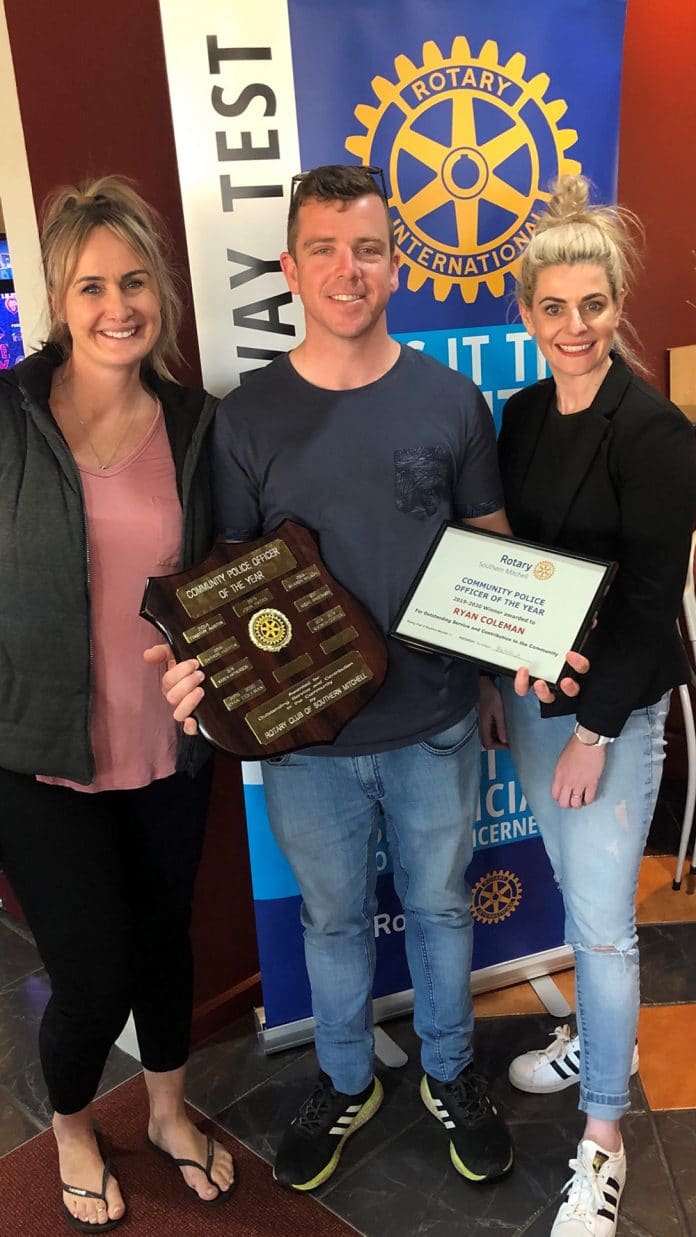 YOUTH Specialist Engagement Officer of Wallan Police Station Senior Constable Ryan Coleman was awarded for his outstanding efforts with the youth in the South Mitchell District.

As part of its community service program, the Rotary Club of Southern Mitchell last week presented the Community Police Officer of the Year awards for the seventh year.

To win the award, the nominated officer had to meet criteria such as demonstrating outstanding service to the community including flexibility, leadership, integrity, respect, professionalism, support and work ethic.

After winning this award, Sen Const Coleman will be nominated for the Peter Toomey Memorial Community Police Officer of the Year set to be awarded in March of 2020 in Albury.

The Wallan Police officer was the ‘main driver’ in setting up a junior Neighbourhood Watch program where children were encouraged to better the community through respecting authorities like parents, teachers and police.

The program was first introduced at Wandong Primary School and expanded to six other schools in the region this year.

Snr Const Coleman said he wanted to engage with children in the Mitchell Shire in a relaxed environment.

“I wanted to build trust and confidence with the kids, I think it’s important to do that in such a small community,” he said.

“Just the recognition of being nominated is good in itself. I like to go above and beyond to better the community I live in and I don’t want to see kids going the wrong way.

“I’m trying to help build resilience among the youth and teach them to respect their parents and teachers. If I only help one person in my whole career, I’ll be happy.”

Runner up for the award, Sergeant Thomas Brown of Kilmore Police, was also commended and presented a runner-up award.

“This awards night saw the culmination of work between the club and local police in receiving nominations and assessing worthy winners of the Community Police Officer of the Year,” she said.

“We have established good working relations between the club and the local station supervisors, and they look forward to working with us each year.”