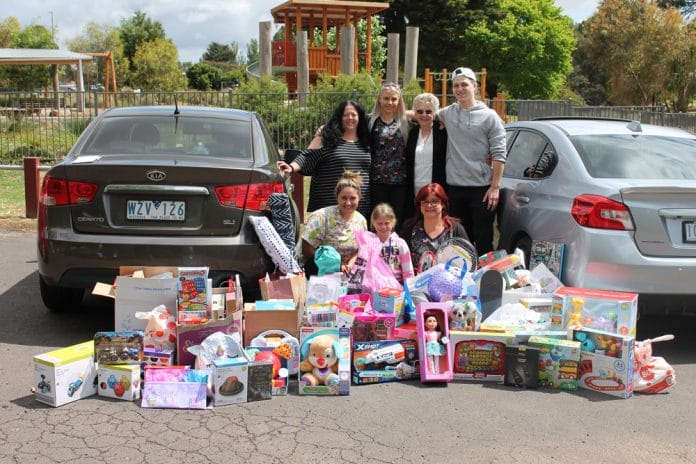 SPREADING Christmas cheer for farmers in need has been a goal for the Pyalong Neighbourhood house in collaboration with Paradise Kids Children’s Centre and Heidelberg Early Learning Centre.

Pyalong Neighbourhood House president Moira Waye said Paradise Kids Children’s Centre director Melanie Young reached out to her for the second year in a row to contribute gifts for the families of farmers.

“Last year she rang me up and said she would like to help and she asked the parents of the centre if they wanted to donate a gift for a farmer’s child. Believe it or not, she and her staff met David and me in Kilmore with 350 gifts,” Ms Waye said.

Ms Waye said Ms Young and parents at the centre were eager to help this year.

She said she spent two days packing gifts into boxes from both the children’s centre and Heidelberg centre.

“I can tell you, any child would be delighted to receive these gifts,” she said.

“There is a huge variety including; books, puzzles, dolls, cars, trucks, clothing, balls, colouring pencils and books, gifts for the farmers and their wives like toiletries and bags.”

Ms Waye said the gifts would be delivered to the farmers alongside groceries and hay donated by community groups and members.

“I get letters every week from families who have received our hampers and also phone calls which are absolutely heartbreaking. So to get gifts as well as groceries will be the
‘icing on the cake,’” she said.

“It is the knowledge that their fellow Australians are thinking of them and sending strength and love that really touches their hearts.

“One lady said that she opened the hamper and she could feel the love and energy coming from that box.

“Another said that in her hamper was a blue beanie which she wears every day to remind herself that people care.”

Ms Waye said Pyalong Neighbourhood House would close on December 13 and re-open in the middle of January.

“This is a testament to the generosity of ordinary Aussies who want to help those who are in dire straits through no fault of their own. I can tell you from where I sit, I am so very,
very proud of them all,” she said.