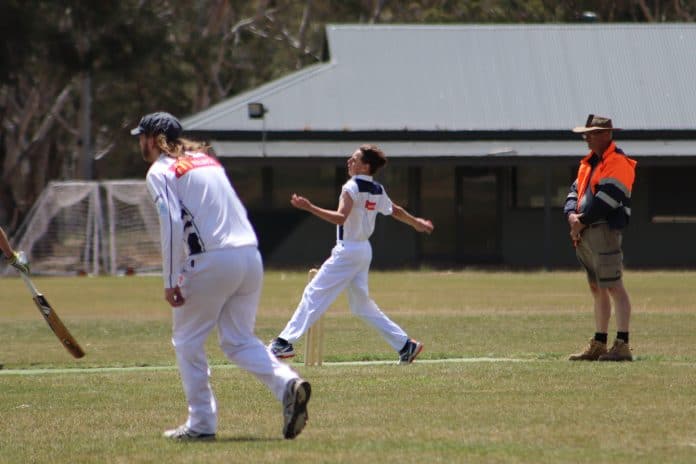 Broadford A Grade set a target of 174 for Eastern Hill to chase in their Seymour District Cricket Association match on Saturday.

The home side’s innings featured a knock of 64 by Evan Mills, including 10 boundaries. The only other batsman to make a real contribution was Cooper Mason with 24.

Daniel Bergowicz and Tim Rudd-Schmidt claimed two wickets each. Dallas Bergowicz was a star in the field, taking six catches.

The visitors made a start in their innings and were 1/11 at the end of day one’s play, after opening batsman Matthew Collard was caught and bowled by Jeremy Bradshaw.

A rare feature of the match was play being halted as an air ambulance helicopter landed on the oval.

Playing at Yea Recreation Reserve, Kilmore posted a first innings total of 150 after a top and middle order collapse.

At one stage Kilmore was 7/36 until Ben Dawson came to the crease to steady the ship.
Dawson made 52, and was supported by tail-enders Corey Dennehy, 39 not out, and Brett Buttler’s 16.

The home side was 0/13 after 13 overs, and will continue its innings on Saturday.

In the other A Grade match, Seymour batted first to make 139 against Tallarook.

After the two opening batsmen, Jason Brown and Brodey Pointon, were bowled out for ducks, the middle order were able to put some runs on the board, with Danny Fountain top scoring with 33.

The home side made a solid start in its innnings as opening batsmen Ben Cooney, 37, and Mitchell Itter, 50, were both not out at the end of play.

Tallarook’s 0/87 puts them in the winning position to cruise past Seymour’s first innings total of 139.

Tallarook and Yea sit on top of the A Grade ladder, both with 36 points, but a percentage of just .39 separating the two sides.

Broadford sit third and Kilmore fourth to round out the top four, in what is already a clear break away from the bottom two sides Seymour and Eastern Hill.