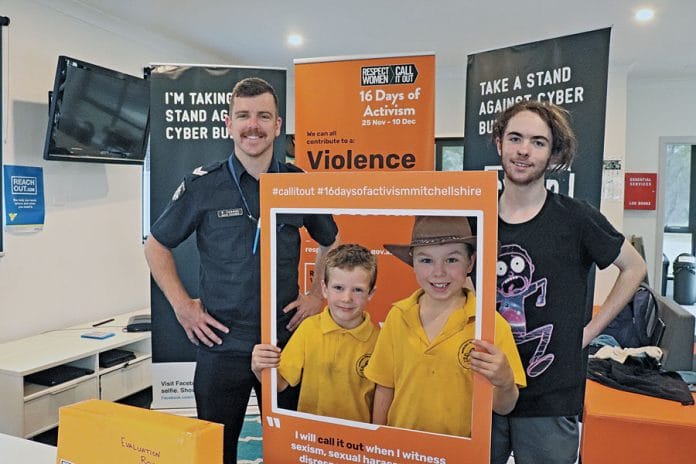 A historic walk to highlight Mitchell shire’s united stance against violence will close Kilmore’s main street for the first ever Community Walk to End Violence on Friday.

The walk is the centrepiece of Mitchell’s 16 days of Activism campaign, where organisations from across the shire have come together to take a stance against gender-based violence.

As a municipality with significantly high family violence rates,

According Victoria Police statistics, the Mitchell Shire ranks eighth highest in the state for incidences of family violence, per 100,000 population rate.

Friday’s community walk aims to bring the community together to highlight a united front in taking a stand against violence, and to highlight the help and support that is available for those in need.

The walk begins at 11.3am at Kilmore’s Hudson Park, with guest speakers at Hudson Park, before travelling north along Sydney Street and then returning to the park via Patrick Street for light refreshments.

The 16 days of Activism, started yesterday and continues through to December 10, with events planned across the shire almost every day.

The state-wide campaign aims to call out all gender based violence, harassment and disrespect against women.

“By coming together, the walk will provide the community with an opportunity to come together and show a united front against violence,” he said.

“The 16 Days of Activism is extremely important in highlighting this important topic. We all have to work together to acknowledge the problem and find practical and worthwhile solutions.”

“We will continue to work hard to ensure victims feel more comfortable in coming forward to report incidents to police,” he said.

The Mitchell Family Violence Unit is made up of an intelligence practitioner and dedicated detectives who have three main functions; to investigate serious and complex investigations, manage high-risk complex and cold cases and to support general duties police.

“Police not only provide safety for victims who make a report, they also refer them to support services so they can get the assistance they need and deserve,” Det Sgt Bliss said.

“If someone close to you discloses that they are a victim of family violence believe them, encourage them to make contact with us or to a support service.”

He referred people to use support service Nexus Primary Health who have dedicated Family Violence Workers. Nexus can be contacted on 1300 773352.

Det Sgt Bliss said people could report incidences of family violence anonymously to Crime Stoppers on 1800 333 000, or if someone was in immediate danger, call triple zero.

“Family Violence on any level is unacceptable and preventable, it is an epidemic that we have to bring to an end,” he said.

“Our main goal is to break the cycle of Family Violence and reporting it is the first step to making a difference.”

Det Sgt Bliss said Victoria Police supported the Respect Women: Call it Out Campaign and encouraged staff and community members alike to “call it out”.

“The community play an important role in setting the benchmark of what is accepted and what is not, and in calling out all inappropriate and discriminatory behaviours,” he said.

“Our commitment to our local community and this initiative facilitates a supportive network for victims, families and children to reach out for help.”

Shop local program is here for City of Whittlesea