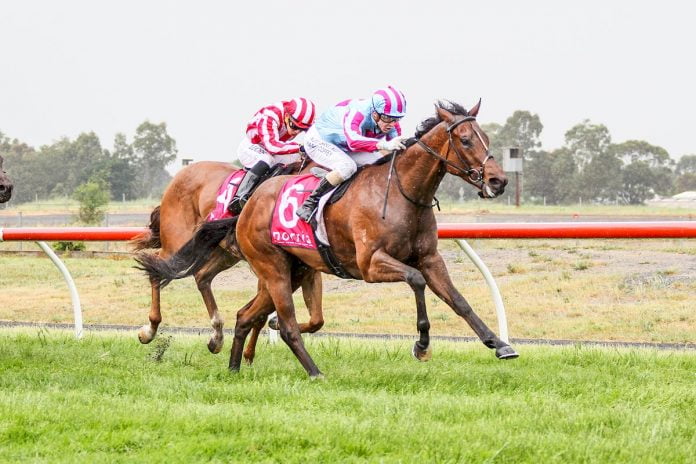 THE Mitchell Shire is seeing success on the racetrack following two wins in eight days for horses bred by Kilmore breeders PT Thoroughbreds.

Titan I Am broke his maiden status at Traralgon and then seven days later, Is Don Is Good won at Moe.

The two horses are the first major successes for the relatively new PT Thoroughbreds, owned by Justine Phelan and Karl Tribel.

“Having only been breeding for eight or nine years, it has taken time to learn what we need to do to produce commercially-viable foals, exacerbated by experiencing a couple of difficult seasons…we have only managed thus far to get three to the track,” Mr Tribel said.

“The first didn’t get the opportunities it should have, the second and third are those that have both won in recent weeks.

“We have three more three-year-olds currently in training and expect at least two of those to be hitting the track within the next couple of months.”

Mr Tribel said it was an amazing feeling to have horses they own or part-own win a race.

“To have bred the horse is simply amazing and is rewarding on so many levels,” Mr Tribel said.

“As a small breeder with five or six broodmares, it is gratifying to be recognised alongside the big breeding operations.

“No, we have yet to produce a black-type performer, or rather the black type race has yet to be won by current or future foals, but it is an achievement to have a winner at any time!”

“I’m not sure we can claim any magic formula though breeding from quality mares, whether well-bred themselves and/or well-performed themselves certainly provides a head start,” Mr Tribel said.

“That said, as a small breeding operation, the foals do get well socialised and go into their racing career as tractable horses with a trust in the people they come into contact with.

“Then of course, the trainer selected and the environment in which they train is equally important.”

Titan I Am backed up his win with a credible run at Moonee Valley on November 15 with a fifth place from a wide gate.

Mr Tribel said of the opportunity presented, he would will return to the Valley on Saturday.

He said Is Don Is Good needed to be on soft to heavy tracks and, with little to no rain forecast this late in the year, it meant he was off the racetrack for a rest.