AFTER a strong finish on day one of its match against Gisborne, Wallan began day two with only one goal in mind – making runs to stay on top.

In the Gisborne and District Cricket Association’s Johnstone Shield, the Magpies swooped in to claim the win with 8/179 runs against Gisborne’s 149.

Coach Chris Vecchie was also amongst the runs, making 31.

Best of the bowlers for Gisborne was Harry Thomas who took 4/50 over 13 overs.

Vecchie said the whole team played well on the day.

“It’s hard to single out anyone who played well because everyone chipped in and there were a lot of little partnerships,” he said.

Vecchie added that going into the game, the side was focused on scoring the runs they needed to win.

“We needed 102 runs, but we were confident we could get the runs. We lost a few early wickets.”

Vecchie said the team was looking forward to taking on Sunbury Kangaroos at Greenhill Reserve on Saturday.

“We’re hoping to just continue our form and get another win to make our ground hard to play on for the opposition,” he said.

Wallan remains on top of the ladder ahead of East Sunbury, Bacchus Marsh and Gisborne. 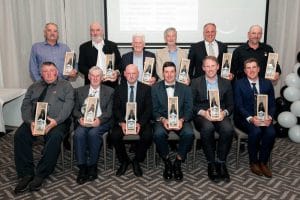 The club celebrated its 50 years on Saturday night with a gala dinner at The Grove, Hidden Valley, following three out of four wins earlier that day.

It’s celebratory weekend started with an evening at the Greenhill Clubrooms on Friday night, where generations of players, past and present, and their families gathered to reminisce.

A highlight of the gala dinner was the announcement of the club’s ‘Team of the Half Century’.

Tight at the top

Romsey cricketers in GDCA team of the year

Laurimar on top in grand final