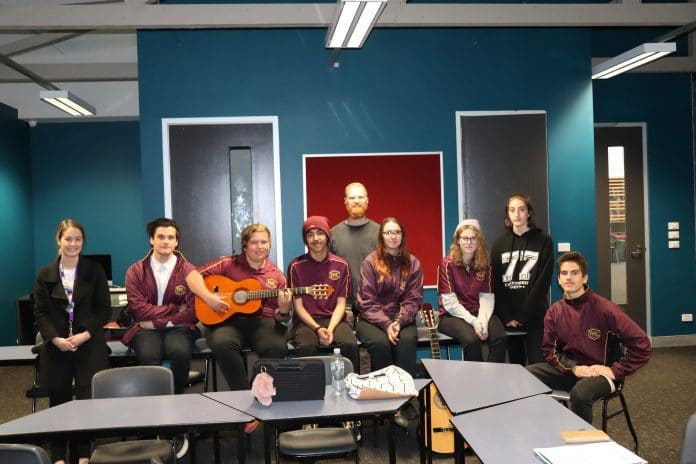 Wallan Secondary College’s VET music industry students are organising a live music event to improve the reputation of the school and Wallan community.

Students created the event to help change both the high school’s and Wallan’s current reputation.

“We want to boost the school’s appearance to the public,” Cooper, one of the music industry students, said.

“Wallan over the years has been portrayed as not a great school – by the students anyway,” Sophie said.

“So we’re trying to put it out there that Wallan isn’t as bad as people think it is, as well as give them a clear understanding of what we do here.”

“We’ve been struggling to find that identity for the school,” Mr Slizewski said.

“This is something that we can look at as a group to build up that community engagement as well, which we all identified being a big problem – that connection not just with our students to the school but also that connection to the wider community.”

The students are following on from previous winter and spring concerts, which were so well attended that students had to sit on the floor of the auditorium.

Student Yoel said the concerts helped promote the arts throughout the college.

“We brought forward the idea of a spring concert to reintroduce the arts and bring more events and shows for the kids in the arts,” he said.

“We decided to do this one to involve, instead of just the school, more of the council and the Mitchell Shire to bring more attention to the youth and the arts.”

“They wanted to shine a light on Wallan’s talent rather than this reputation that they feel the school has, which is not a good reputation by what they’re telling me,” Ms Wellington said.

“They’re really excited to change the way people view Wallan as a school and community.”

The students hope it can become a frequent event for the council.

The Mitchell Shire Council youth program VOLUME has assisted the students in the organisation of the event.

“Not only do we have young people performing but we’ve also got sound and lighting going on so it gives them the opportunity to be able to play around and be creative with how they’ll set up a stage.”

Mitchell Shire Mayor Bill Chisholm said the council and FReeZA partnered with Wallan Secondary College to bring Wallan Unplugged – a concert to showcase some of the most talented students in the region.

“The event will bring together students, teachers and community members to highlight the different skills residents in Mitchell Shire have, and also build strong community connections,” he said.

“Initiatives like Wallan Unplugged and the Pop-Up Recording Studios are fantastic outlets for students as they look toward their future.”

Final details for the event will be posted on the Wallan Secondary College’s Facebook page.