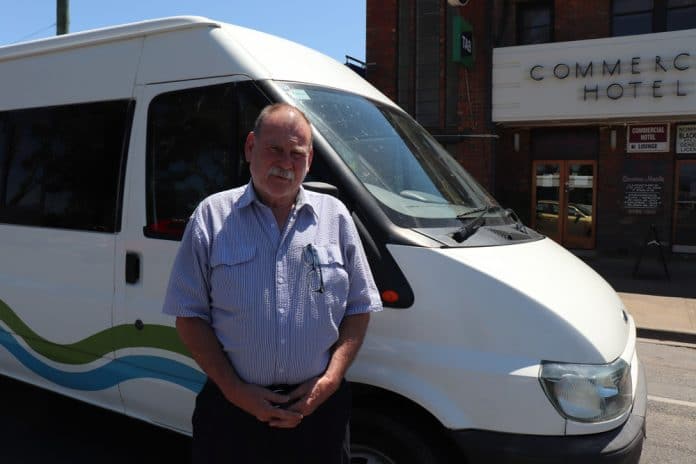 A Broadford resident has taken the town’s lack of public transport into his own hands, starting an on-demand bus service to take people to and from Broadford’s hotels and clubs.

Greg Dulhunty bought a mini bus after seeing the lack of buses and taxis, meaning people could be stranded in Broadford if they missed the last train.

Mr Dulhunty said both of the hotels and the golf club have jumped on board his initiative and were subsidising the service.

“It’s just that there’s no public transport. People get stuck in Broadford, you can’t get a taxi, people are getting done for drink-driving all the time because if you want to go for a beer, you have to drive,” he said.

Mr Dulhunty’s service costs a $5 flat fee for a trip within Broadford and his services will also be used as a shuttle by the State Motorcycle Sports Complex and by elderly people needing to go to the shops.

“If they want to book a taxi, it costs them a fortune whereas I can do it very cheaply for them. I like old people, I am one,” he said.

Mr Dulhunty said he received rave reviews from Broadford residents after his first weekend on the road.

“There were a lot of people. They carried into the early hours on Sunday morning and I was there carting them backwards and forwards. There were no issues, everyone was great,” he said.

“The people I picked up were very grateful. They said Broadford’s needed this for years.”

To use the service, residents can call either the hotels, the golf club or Mr Dulhunty himself on 0407 764 727.