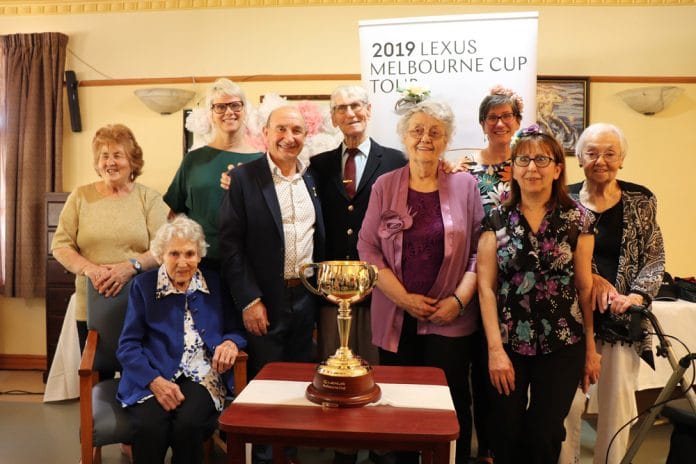 One of horse racing’s most coveted prizes, the 2019 Melbourne Cup, visited Kilmore’s Dianella Hostel residents in the lead-up to the race that stops the nation.

The Lexus Melbourne Cup Tour involves the cup travelling across the country before returning home to Flemington for next week’s Melbourne Cup Carnival.

The Kilmore and District Hospital were lucky enough to host a visit, before it travelled to the Tallarook Hotel in the afternoon.

Mr Agresta spoke about riding some of Cummings’ best horses before their famous wins.
“I was fortunate enough to ride his last five Melbourne Cup winners. I rode them all in trackwork, Kingston Rule, Let’s Elope, Saintly, Rogan Josh and Viewed,” he said.
“I don’t know what it was, he has 70-odd horses but I always seemed to land on the right one.”
The Kilmore and District Hospital chief executive Sue Race said it was great to have the Melbourne Cup at the hospital.

“We had a lovely morning. The Cup started up at Caladenia Nursing Home and the residents were involved in drawing the sweep for the Melbourne Cup then we went to the hospital and down to our public event at Dianella,” she said.

“The residents had been looking forward to this for quite a while, they all dressed up and we had a fascinator competition and a barbecue lunch to celebrate.

“It’s a terrific day, they’re loving it and it’s great to see them having such a great time.”
Dianella Hostel resident and horse racing enthusiast Kevin Cooper said residents were grateful to the Victorian Racing Club for the opportunity to hold the Melbourne Cup.

“It’s been great not only to see the cup but we’ve also been privileged to hold it and we can’t thank the VRC enough,” he said.

“The inside knowledge of Bart Cummings’ training methods and tactics as told to us by Joe really explained why Bart was such a successful trainer.

“He knew his horses and so did Joe, so they must’ve been a great combination.