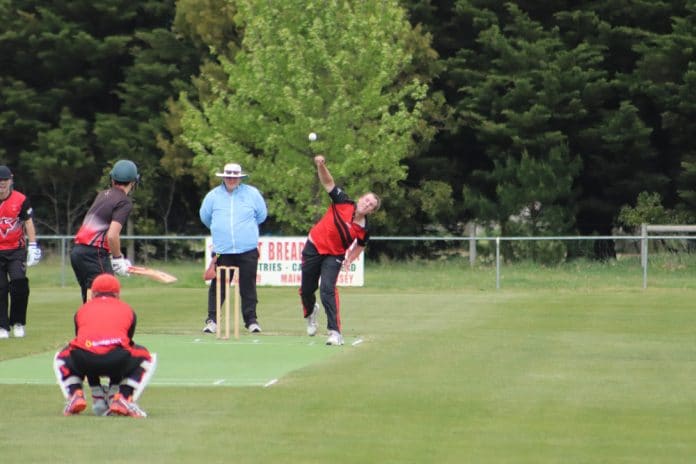 A rainy Saturday afternoon cost Romsey its second win of the Gisborne and District Cricket Association McIntyre Cup season when its one-dayer against Riddell was abandoned with 11 overs left.

After winning the toss and electing to bat, Riddell put up a strong total of 192 from 40 overs.

A strong opening partnership put the visitors in a strong position before Harry Fisher (53) and Matthew Darby (59) put together an 87-run partnership.

After Fisher fell, caught by Romsey captain Ben Way off the bowling of Matthew Milne, Riddell were in a good position at 4/161.

However, the middle order couldn’t put partnerships together as wickets continued to fall right up to the last ball.

Milne bowled well, taking 4/45 from his eight over spell.

Romsey made a great start, with openers Chris Burkett (22) and Matthew Milne (65) both posting decent scores.

When the rain came, Taylor Stevenson was well on his way to a big total on 37 while Ben Way (8*) had only just gotten his innings going with Romsey at 2/144 through 29.2 overs.

Romsey captain Ben Way said it was a disappointing end to the match.

“We were cruising at 2/144 and it was the last little shower of rain for the day and it was all sunshine afterwards so it was disappointing to go off,” he said.

“Once you go off after 6pm, you can’t go back on and it stopped raining right as we went off so we weren’t allowed to go back on.

“We thought we deserved to win but we’ve just got to wear it, move on and take the momentum created over the last couple weeks into next week.”

Way praised the performance of Milne with both bat and ball.

“He started the year bowling quite well and he’s making a few runs as well so he’ll be a big part of where we’re going this year and he’s building the confidence to do that week-in and week-out,” he said.

“We thought we did well in the field, 240 was a par score with the conditions so we did well to hold them to 192 at the end of the day.”

All but one McIntyre Cup fixture was rained out, with Gisborne having a 69-run win over St Anthony’s.