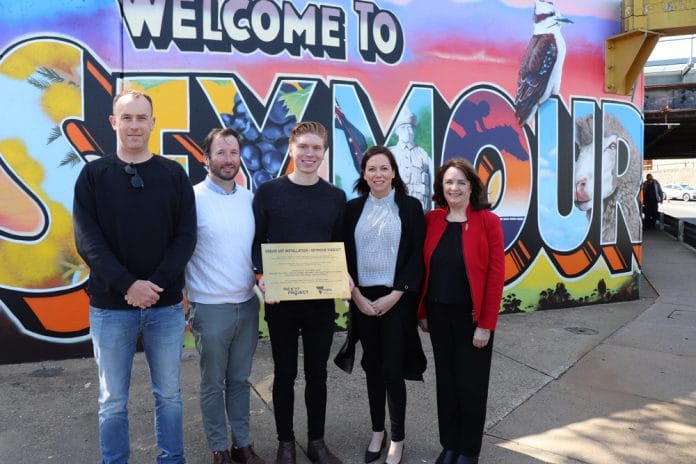 The $152,840 project was funded by the State Government’s Pick My Project initiative and completed under the auspices of The Seymour We Want and project managed by James Hall and Bruce Johnstone.

Street art from Melbourne studio 90 Degrees covers each wall of the rail underpass that connects the north and south of Seymour.

The artwork depicts the region’s best assets including the Goulburn River and wildlife, reflects the racing and agricultural industries, as well as paying tribute to the town’s rail and military history.

Mr Johnstone said he was stunned with the outcome which was better than we could ever have imagined and thought the ‘Welcome to Seymour’ sign returned some town pride to the community.

“We really just thought we’re painting a wall and fixing an old, dirty viaduct but what it’s done is actually transform people’s impression of Seymour and that’s not something we could’ve planned to do and it’s been a really nice outcome,” he said.

“What it’s done is actually make people proud of Seymour and particularly that part has made people think, ‘I live here and I’m proud of it’.”

Minister for Regional Development Jaclyn Symes officially opened the installation and said Art Attack Seymour was one of her favourite projects from the Pick My Project initiative.
“I voted and this was my number one vote and I certainly encouraged other people to vote for it as well,” she said.

“It was a long talked about project and finally two very persistent locals were happy to get behind it, project manage it and make it happen.

“I’m really grateful for the initiative of our government with Pick My Project because it really enabled grassroots, community-driven projects to get off the ground when it didn’t necessarily fit into a normal grants funding round.”

The Art Attack Seymour is one of nine successful projects from the Pick My Project initiative in the Goulburn region.

The region received more than $1.48 million in funding through the initiative, after a total of 12,697 votes were cast.

Other successful projects in the Goulburn region include establishment of the one-stop help shop the Wallan Future Hub, mobile, nature inspired playgroup The Bush Bus, and I Wish I’d Asked, a project helping children and seniors tackle loneliness together.