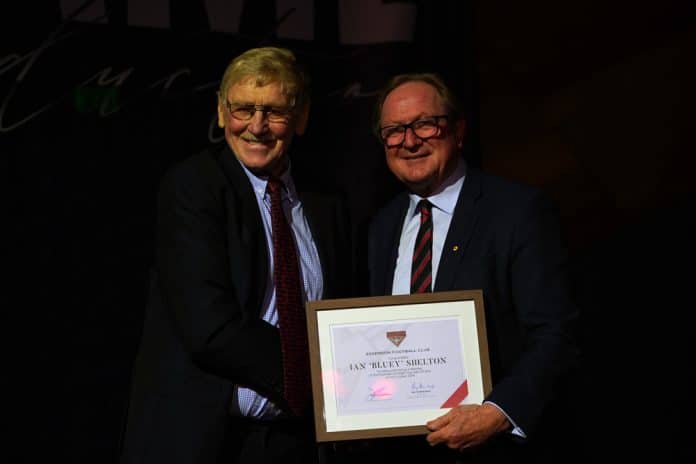 Recruited from Avenel-Longwood Football Club at 19 years old, Shelton won the club’s best first-year player award on his way to selection in 1959 grand final after just 10 games of league footy.

Shelton finished second in the club’s best and fairest for the 1962 premiership season and was selected to represent Victoria against Tasmania.

After leaving football due to an eye injury sustained on his farm, Shelton came back in 1965 at the request of teammates and was named vice-captain in his second premiership with the Bombers despite only being able to see out of one eye.

He guided the Lions to another flag in 1982, this time in the Goulburn Valley Football League.

Shelton received life membership from Essendon in 2005 and was named centre half-back in the Bombers’ team of the century in 2016.

He was also named centre half-back and coach of Seymour’s team of the century in 2012.
In an interview with legendary Bombers coach Kevin Sheedy at the club’s Crichton Medal night, Shelton said he was forever grateful to the club.

“For 60 years of my life, Essendon’s been opening doors for me and picking me up when I need a hand so I’m forever grateful to this great club for that,” he said.

“The biggest thing in my life was being with the Essendon Football Club and now to be recognised in this way is something that I’ll die a happy man with.”

Sheedy said Shelton had an influence over his own career.

“Bluey is the main reason I grew up supporting Essendon. He is an incredibly inspirational player and even though he had a short career, his impact was profound,” he said.

“I wore the number 10 because of him and I never changed my number. When I moved into a coaching role, I always gave players that I thought would be very good players the number 10.

“To me, Bluey was the one person that Essendon needed to protect its wonderfully skilled team.”

Silence of the ramps

Whip-cracker to pull in show crowds