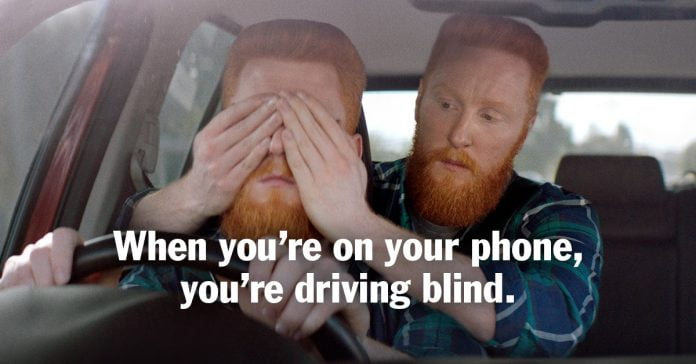 The Transport Accident Commission is again warning motorists of the dangers of using mobile phones while driving, in light of the state’s rising road toll.

A simple glance at a mobile device while driving can have a detrimental effect, according to the TAC.

The TAC’s campaign ‘Towards Zero’ aims to achieve no road deaths and serious injuries – ‘a future where every journey is a safe one’.

Well-known TAC slogans like ‘When you’re on your phone, you’re driving blind’ are supported by images aimed at confronting drivers of the dangers of their actions.

The TAC’s research concluded if a driver was to look at their phone for two seconds, while travelling at 60 kilometres per hour, they would travel 33.33 metres blind.

The TAC advises drivers to reduce the risk of distractions while driving by installing the ‘do not disturb’ feature on their mobile device, putting it out of reach in the boot or glove box of the car or turning it off before driving.

“The best thing to do is have a dash cam and record footage of the offender driving erratically or using their phones so Victoria Police can investigate,” he said.

“If you have a passenger who can film it, make sure you film the registration number of the driver, as well as them committing the offence.

“If you see it but have no evidence, it makes it hard because it’s your word against theirs.”

For probationary and fully-licenced drivers, being caught using a mobile device results in the loss of four demerit points and possibly a suspended licence if all points are lost. Both licence holders also face a $496 fine.

For more information on distracted driving, or the ‘Towards Zero’ campaign, visit www.tac.vic.gov.au/road-safety.