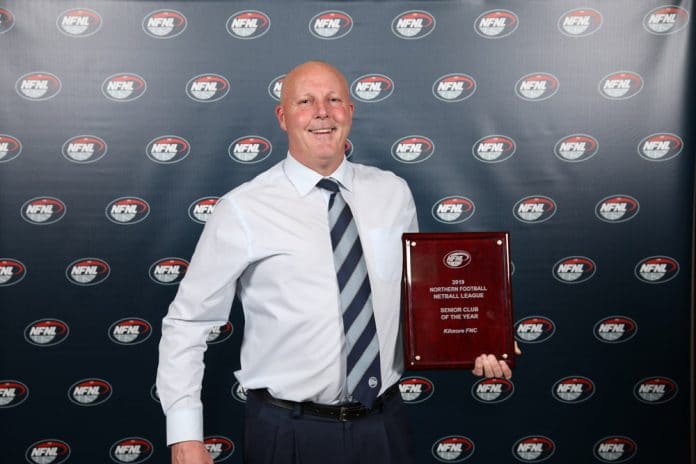 The Blues, possibly one of the smallest clubs in the league, took home the award over more than 40 clubs across all three men’s and women’s divisions.

The award recognises not just on-field and on-court success but financial responsibility and off-field behaviour.

Kilmore president Paul Maher said he was elated, especially for the club’s volunteers.

“I couldn’t be happier. Not so much for me but for all the hardworking people who have worked around this club for many years,” he said.

“It’s a huge reward for the effort they’ve put in and I’m blown away, honestly.”

Maher said the club’s award came down to two things, culture and respect.

“If we’ve got a strong club off-field, the result on-field and on-court will flow on and that’s happening with to the club so I couldn’t be happier,” he said.

It shows in the club’s on-field and on-court products, with Kilmore being the only club to have both seniors and reserves in the division three finals and two of the club’s five netball teams making the finals including one finishing runner-up.

Maher said having well behaved players and supporters was a big focus for the club.

“We didn’t have one footballer suspended or front the tribunal this year, but they also take into account off-field behaviour and if there’s any issue with unruly crowds or supporters using abusive language and we had no issues in that area,” he said.

“It’s been a holistic approach, not just with the playing side but the whole culture of the club and making sure we show discipline and pay respect to opposition and supporters.”

Maher said the club isn’t resting on its laurels and there’s more to be improved on but it needs some more help to do that.

“There’s a small band of hard working volunteers and they can’t keep doing it forever. What we need is not a few people doing a lot of work, it’s a lot of people doing bits and pieces,” he said.

“It’s a semi-professional organisation being run by a handful of volunteers so any further help or support we can get would be greatly appreciated.”