Home News Community Pushing for a cause 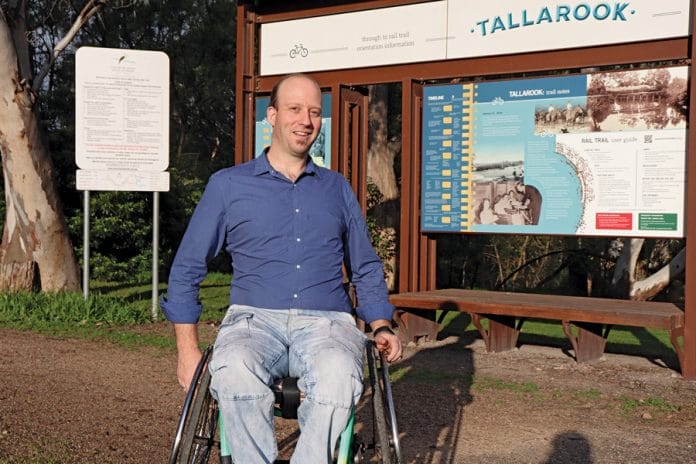 Wallan resident Adam Georgelin is pushing his wheelchair the length of the Great Victorian Rail Trail to raise money and give back to two organisations that have played a large part in his life.

Mr Georgelin, who was born with Spina Bifida on the lower part of his spine, plays in the Victorian Wheelchair Football League, where he won a premiership with Richmond earlier this month.

Disability Sports and Recreation and the Robert Rose Foundation both play major roles in the Victorian Wheelchair Football League.

The Robert Rose Foundation was set up in honour of Victorian Football League footballer and state cricketer who became a paraplegic at the age of 22, after a car accident in 1974. The foundation assists people with spinal cord injuries and their families.

Mr Georgelin said the two organisations had been great to him since he started playing wheelchair football.

“I’ve always loved footy and having a physical disability, there were no options to play footy. As soon as I heard about the wheelchair footy, I had to get into it,” he said.

“The idea came about because I just wanted to give back to them and I wanted to do something that was achievable but challenging.”

Mr Georgelin will start his challenge, Push On, at Tallarook on December 1 and will travel a total of 125 kilometres to Mansfield, finishing on December 3, International Disability Day.

His wife Tammy will ride a bike by his side to accompany him.

Mr Georgelin said his plan was to push more than 40 kilometres each day with overnight stops in Yea and Merton.

“There’s a fair bit of training involved. I’ve been training with the footy, keeping fit with the footy has been good but now it’s going to be more specific to cardio training,” he said.

“From Yarck into Merton, it’s winding up to the base of the snowfields so that’s going to be the toughest part.”

Mr Georgelin has already raised close to his goal of $5000 with more than three months remaining but is looking to increase his target and split the money raised between the two organisations.

“We’re 14 weeks out and we’ve nearly hit it so once we get to that, I’ll bump it up and whatever I get, I’m going to be thrilled to bits to receive,” he said.

“I just want to thank the community so far for what they’ve done.”

Getting to nearly $5000 in eight weeks has been fantastic and we’ve still got 14 weeks to go.”

Mr Georgelin will have donation tins at a business in Euroa and a gym in Whittlesea.

He welcomes any other businesses who would like to have a donation tin in their shop.

People can donate to Mr Georgelin’s cause, by visiting www.gofundme.com/f/push-on-adams-cycle-challenge.

Submit your nominations for the My COVID Hero awards