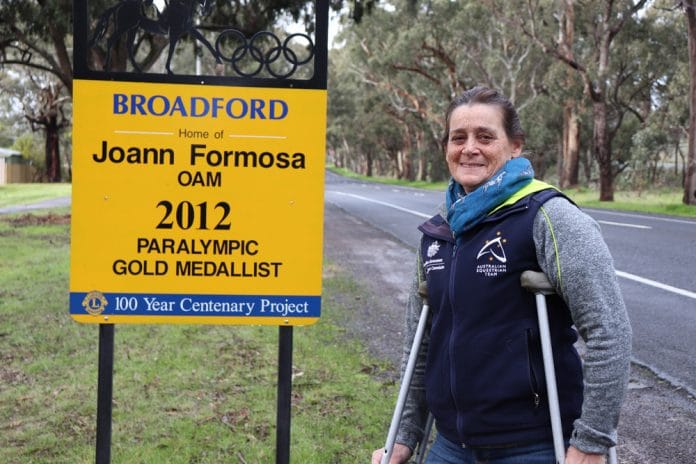 Paralympic gold medallist Joann Formosa is hoping to receive help from the community to get her to the 2020 Tokyo Games next August.

The long-time Broadford resident has been training to return to the big stage since coming from London in 2012 with gold around her neck, but the only thing standing in her way is the exorbitant cost of getting there.

Ms Formosa said she put everything she had into getting to London and the World Equestrian Games.

“I mortgaged my house to buy my horse, I sold a lot of my stuff just to finance and take out loans just to get to where I am,” she said.

“Now, I don’t want to have to sell my gold medal to get to the next games because that’s my horse Worldwide’s retirement.”

It costs thousands of dollars to enter Olympic qualifying events, before accounting for a horse, transport and training, which can cost in the vicinity of more than $50,000.

“For everyday people, it’s hard because it’s so straining on the budget. You have to be really dedicated and willing to give everything up.

“It would just be nice to be able to get out there and represent Australia again and show all the hard work because I know I can still do it and I know I can come back with more gold.”

Ms Formosa has lived in Broadford for most of her life, riding with Kilmore Pony Club and helping found Kilmore Adult Riding Club.

She made her debut for the national team at the 2006 World Equestrian Games before going to Rio and winning gold in the Dressage – Championship Grade 1B event on Worldwide PB.

Ms Formosa said she needed a bit of help from the community and businesses to get her back to the elite level.

“It’s been an amazing journey. It’s been a hard one too. I did what I wanted to do and I know I can do it again so now is my chance to shine,” she said.

“I’m quite willing to have advertisements on my 16-foot float. I can come out and do inspirational talks. I’m happy for anyone to help out in any way.”

To donate to Ms Formosa’s journey to Tokyo, visit asf.org.au/athletes/joann-formosa or gofundme.com/JoannFormosa.