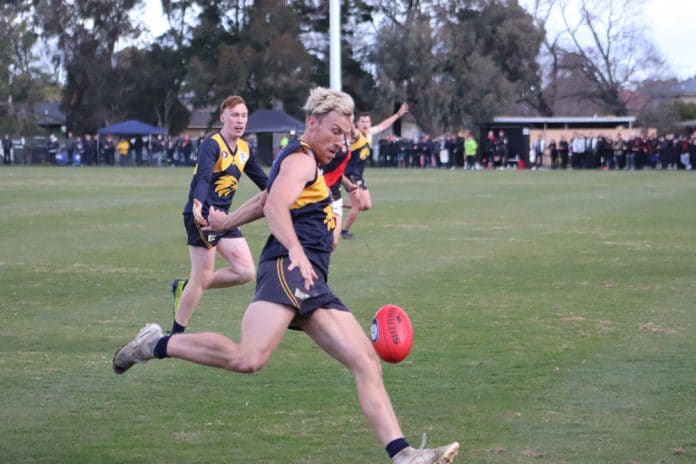 Whittlesea are through to the Northern Football Netball League division two grand final after a 28-point win over Eltham in their preliminary final.

Whittlesea was in control of the game from the get-go at Epping Recreation Reserve on Saturday, soaring to a 14-point lead at the first break after a four goal to one opening term.

Eltham closed the gap in the second, kicking three goals to two to trail by seven points at half-time.

The Eagles kicked the first two goals of the second half to lead by 20 points midway through the third term, before Eltham responded by kicking two of the next three to trail by 15 points at three-quarter time.

With everything on the line, it was a tight and physical final term.

The Eagles hit the scoreboard first and the two sides traded goals until late in the piece when Whittlesea’s momentum became unstoppable.

Two straight goals in the final six minutes sealed the win for the Eagles, who will take on Banyule on Saturday at Preston City Oval in the division two decider.

Whittlesea coach Blair Harvey said he was really pleased with how the Eagles finished off the Panthers.

“It was pretty close to half-time. We’re really pleased with our last quarter, it was really strong and we’re going into the grand final with a bit of momentum now,” he said.

“Matt Coen and Luke Deards were really good down back and Jaron Murphy and Xavier Dimasi had really good games again.

“Jaron was fantastic, he kicked four goals from the wing and really sets us up so he’s a big key for us when he gets going.”

The Eagles are 1-2 against the Bears this season, dropping the first meeting at Whittlesea Showgrounds by 44 points but exacted revenge at Beverley Road Oval in round 16.

Their last meeting came in the second semi-final just two weeks ago with the Bears prevailing by seven points.

Harvey said the Eagles pace was key on Saturday and would be vital in the grand final.

“I think our ball movement and leg speed were key and that’s going to be crucial against Banyule. They’re a bigger side so hopefully our leg speed will catch them,” he said.

“They’ve been the benchmark all year but we’re really looking forward to it.

“We only went down by seven points the other week so we think our best is definitely good enough.

“We’ve got 22 fit players so we have no excuses and hopefully we go out there and get the job done.”