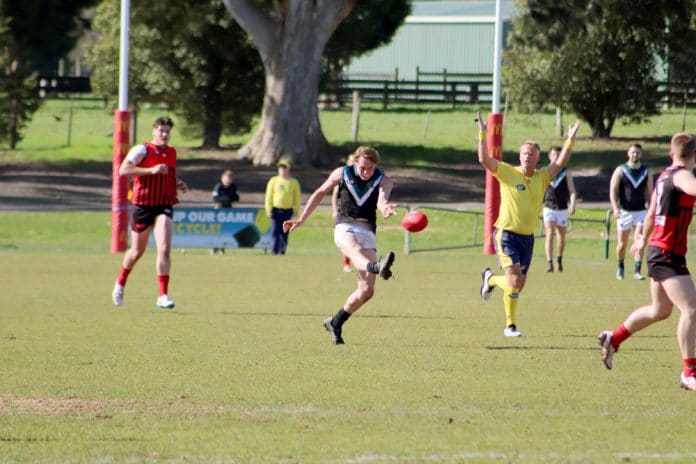 Laurimar suffered its third loss in four weeks, going down to Panton Hill by eight points in a back and forth semi-final on Saturday.

Playing at Whittlesea Showgrounds, the Power started well, taking a nine-point lead into quarter time after a tight two goal to one first term.

The Redbacks responded in the second term, booting four goals while keeping Laurimar goalless to lead by 11 points at half-time.

Laurimar kicked the third term’s only goal and held Panton Hill scoreless as the margin closed to just three points at three-quarter time.

The fourth quarter was just as tight with both sides kicking two goals each, but Panton Hill was able to pull away despite being errant in front of goal from eight scoring shots.

Laurimar coach Justin Sherman said while the result was disappointing, he was happy with the performance under pressure.

“It’s disappointing but we were very happy with how our young brigade performed,” he said.

“We’ve had some injuries at the wrong time of year but I couldn’t be prouder of how our young fellas performed and took it right up to Panton Hill.

Fortunately for the Power, the double chance means they take on South Morang at Whittlesea on Saturday, with the winner meeting the Redbacks in the grand final.

The Lions are the only side other than Panton Hill to have a win over Laurimar over the course of the season.

Sherman said every game was a danger game at this time of year.

“Irrespective of who we play, we just have to bring our best brand of footy on the day and hopefully we can do that this week.

“We’ve got four or five injuries at the moment and we’ve had to debut a few kids who have played well for us.

“We’ve had some injuries across the year but we’re using that as no excuse but when you don’t have a full list it does hurt you.

“We’re looking forward to getting back on the track and going up against South Morang this week.”

Cherry on top for Eagles gun