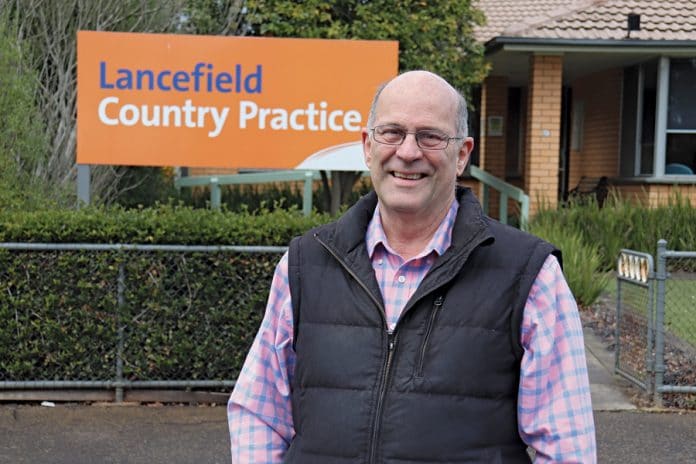 After half a century as a doctor and 33 years in the Lancefield community, Dr Paul Carter is hanging up the stethoscope.

Born in the UK, Dr Carter came to Australia in 1976 and worked as a pathologist at the Royal Melbourne Hospital for four years before joining a practice in Romsey in 1986, where he discovered his passion for rural practice.

Dr Carter said the Lancefield community had become his family.

“I came here 33 years ago when the now bed and breakfast was a bush nursing hospital. The little house at the back of it was the nurses’ quarters and I used that as my surgery. It froze in the winter and boiled in the summer,” he said.

“Right from the very word go, I felt welcomed and taken in as a family member and got to know people on a very personal level because we did lots of house calls, and years later when I was on my own, people provided me with meals and looked after me.

“I looked after them but they’ve also very carefully, at times of my life when I needed them, they looked after me as well so this is a very precious part of my life.”

Lancefield means so much to Dr Carter that he’s produced a 45-minute film called Lancefield Dreaming about what makes the town so special.

The film will premiere to sold-out crowds on Friday and Saturday at Lancefield Mechanics Hall.

“We think it’s so special we’ve made this film about it so that the children and everybody else recognises the specialness and helps to protect it,” he said.

“I think the specialness of communities, there’s a risk of it being lost around the world and we don’t want that to happen here.

“It’s about creating song lines about Lancefield to preserve the specialness of the culture and the community here down the generations.”

In 2013, Lancefield Country Practice won the Rural General Practice Award at Victorian Rural Health Awards and Dr Carter said he planned for the next generation of country doctors to carry on the same standard of care.

“I’ve deliberately recruited people into the practice of my children’s age because the last thing you want is a practice which is a group of people around their late 60s who all want to retire together,” he said.

“All the doctors here are around 20 or 30 years younger than me and I’ve done that as a deliberate policy because now I’m in my 70s and want to retire, I’m handing over to people who have enthusiasm, energy and many years of practice left in them.”