Home Sport Football Riddell gets the best of Romsey 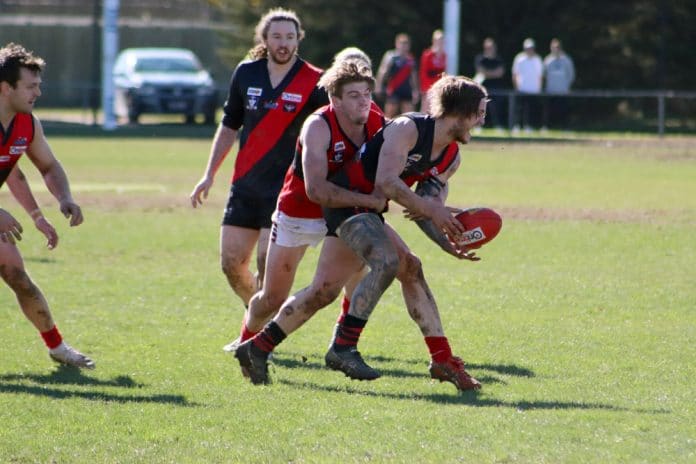 Despite their best efforts, Romsey couldn’t hold on to top spot on the Riddell District Football Netball League ladder, falling to Riddell by nine points in a tight, scrappy affair on the road.

The Redbacks felt the pressure early with Riddell dominating the centre clearances and kicking the first four goals.

Romsey struggled to get the ball into their forwards until two goals late in the first term brought the margin back to 13 points at quarter time.

The Redbacks were able to close the gap in the second term, kicking three goals to two to trail by nine points at half time.

Knowing the minor premiership was on the line, Romsey came out of the sheds for the second half with a different intensity.

Scoring picked up in the third term as Romsey booted five goals to three to lead by three points at three-quarter time.

The Redbacks weren’t able to carry their momentum into the final term, with the home side kicking two goals unanswered to steal the win.

Romsey coach Corey O’Sullivan said it was disappointing to lose the top spot but it doesn’t make a difference in the grand scheme of the finals.

“We’re playing in the same final so it essentially doesn’t matter,” he said.

“It was one of those games where one team gets the ascendency and takes advantage of their opportunities.

“They had a couple eight minute periods in the first and fourth when we weren’t able to shut them down.

“We take a lot of positives away from the game, while we let them off to a four goal start, we were able to get them back in the third. We know we’ve got a lot to work and we try to improve every week.”

Despite dropping from first to second, the Redbacks future doesn’t change as they take on Diggers Rest in the qualifying final this week at Romsey Park.

O’Sullivan said his side was going into the first final with confidence.

“We know our best football can beat anybody but we also know Diggers are September specialists,” he said.

“They’re exceptionally experienced and have some amazing players. There’s one time of the year when Diggers stands up and that’s September.

“We’re taking on the reigning premiers who finished first and the one thing this playing group does is love a challenge and they get that opportunity on Saturday.”