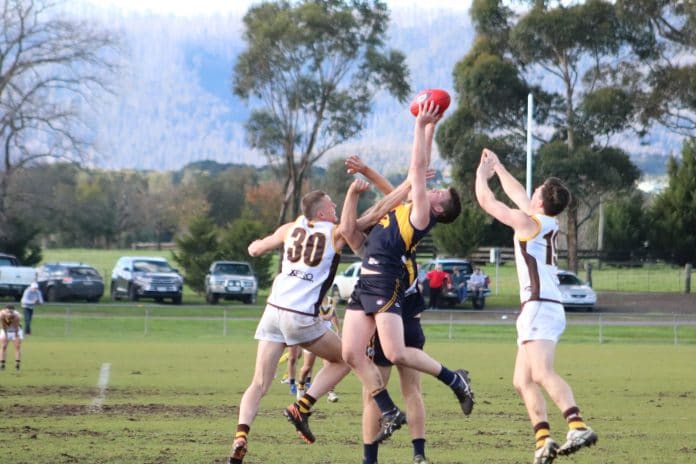 The Eagles were able to hold off a persistent Bears outfit to win by 11 points at home.While Whittlesea led at every break, Thomastown were always within two or three kicks and pushed the Eagles to the limit.

Whittlesea started well, leading by seven points at quarter time but were able to open up the margin further in the second term, adding another three goals to lead by 16 points at half-time.

Thomastown responded in the third term, bringing the margin back to 11 points at three-quarter time.

The visitors kept pushing, kicking three goals in the final term but Whittlesea was able to hold them off, replying to each Bears goal with one of their own.

Whittlesea coach Blair Harvey said it was a good win against a top four side.

“We got out to a good lead, started well and finished off well,” he said.

“We’ve beaten everybody in the top four so we know we’re capable to beating any of those sides, it’s just about turning up and executing on the day.”

Harvey said there were a few players who had timed their runs well and were playing their best footy of the season.

“We had a few really good performances, Nathan Stefanile in the ruck was a really good again, Nathan Andrews played his best game of the season, Max Dyson was another who played really well and Sam Indian was really good as well,” he said.

“Clancy Bland was best on ground, it was definitely his best game of the season too.

“We worked pretty hard over the last six weeks on our fitness and the guys are getting rewarded for that.”

Whittlesea remain second on the ladder with the win, just 40 percentage points behind Banyule and close the home-and-away season against eight-placed Watsonia away.

The Eagles have a chance to take the top spot, but most likely need Banyule to lose to Thomastown.

Blair said the Eagles wanted to put four quarters together this week against Watsonia.

“We’ve still got to play good football, we don’t want to flirt with our form too much so we want to execute our game-plan and play four quarters of football which we haven’t played yet,” he said.

“It’s just working on what we’ve been working on at training and fine tuning before the first week of finals. We just want to play the type of football we’ve been playing and continue that run of form.”

Redbacks in a purple patch