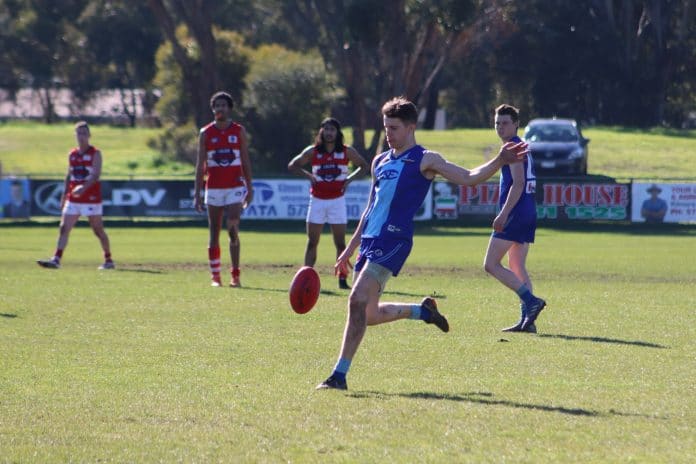 Kilmore will play its first finals series in 17 years – taking on South Morang in an elimination final at Whittlesea Showgrounds on Sunday.

The Blues should carry some momentum into the Northern Football Netball League division three finals after a 120-point win over Lalor at home.

Kilmore finished the home-and-away season third on the ladder, just half a game ahead of South Morang but four games behind Panton Hill and Laurimar.

It was a tight start as Kilmore on Saturday, leading by just seven points at quarter time after kicking three goals to two in the first term.

The Blues started to gather some momentum in the second term, booting seven goals to three to lead by 33 points at half-time.

Lalor didn’t trouble the scorers in the second half as Kilmore kept the Bloods goalless up to the final siren.

The Blues kicked four goals in the third term to lead by 60 points at three-quarter time, putting the result beyond doubt but seemingly finding another gear in the final term, piling on 10 goals unanswered.

“They really put it up to us in the first and caught us napping a little bit so at quarter time we were able to talk to the guys and make them more aware of what was happening – we were able to stop their run and worked our way further and further in front after that,” he said.

Ben Cooney had a day out, kicking eight goals in the win.

“Ben’s had to change his role throughout the year, he started playing in the midfield but injuries to key forwards meant he’s played up forward for the last five or six weeks. He had a ripper this week so he’s finding a bit of form at the right time of the year,” Phillips said.

“Leigh Irons was really good through the middle too. I lost count of how many possessions he had.

“Everyone contributed, one thing we spoke about after the game was some individuals had standout games but every bloke can walk off the field and say they had a crack.”

Thinking ahead to this week’s final, Phillips said the Blues lost to the Lions in both meetings this season, which gave them some added motivation.

“We’re definitely going to put a lot of time into the things we can do not to let it happen again,” he said.

“They’ll have their tails up after beating Laurimar so it’s a good challenge and everyone’s got to be switched on and come ready to play.

“You can’t have any passengers in a final so hopefully we get our 22 right and they come ready to play on the weekend.”