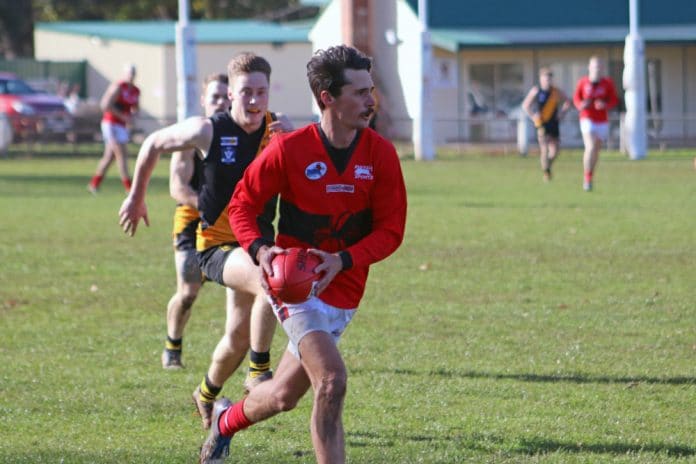 Romsey has one hand on the minor premiership after a win over Macedon at home on Saturday, the Redbacks’ third victory on the trot.

The Redbacks are still on top of the Riddell Football Netball League ladder, ahead of Diggers Rest by close to 100 percentage points but has a tough ask this week, playing Riddell who sit in third place.

A back and forth first term saw the two sides trade goals, kicking four each as Romsey took a one-point lead into the first break.

Scoring slowed to a halt in the second term, with neither side making any impact on the scoreboard whatsoever.

Offence picked back up in the third term as the Redbacks added three goals to their tally while holding the Cats to just one. The home side took a 12-point lead into three-quarter time.

The Redbacks put the result beyond doubt in the fourth quarter, booting five goals to one.

Romsey coach Corey O’Sullivan said it was a good win against a full-strength Macedon side.

“Last time we played them they were pretty underdone and had a few missing so it was a good win for us,” he said.

“We were going into the win in the last with the game on the line but the boys worked really hard and were able to take the game away from Macedon.

“We controlled the last 15 minutes of the game so it was a really good effort.

“Nathan Blair had an exceptionally good game. Aiden Tessari was great, as was Ricky Wood in the back line.”

O’Sullivan said the Redbacks midfield stood up in the final term.

“We know how dangerous Macedon can be, that was my concern at three-quarter time. You expect them to stand up but our midfield delivered which was pleasing,” he said.

O’Sullivan said the pressure would be on again this week against a Riddell side that would be looking to book a first round finals bye.

“It’s going to be a really good last round of footy. We’ve struggled against Riddell so there’s no hiding from that,” he said.

“The last six or seven times, we’ve come up short and they’ve had answers for us. It’s a big game and we certainly want to stay on top.

“We’ll go in with confidence and some good form so we’ll just put the skates on a roll out there and see how we go.”