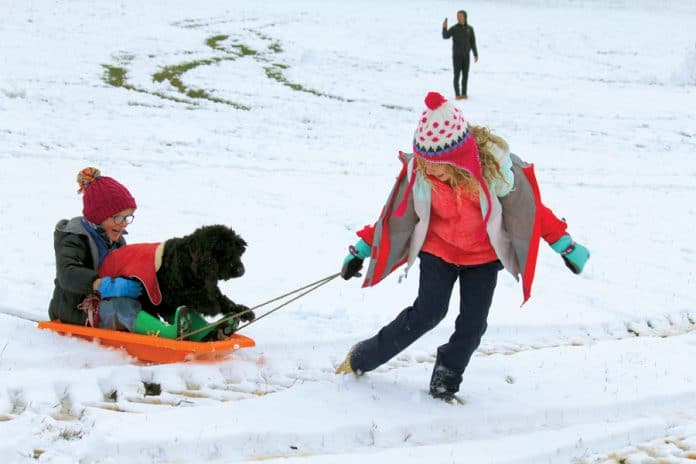 AS a cold snap over the weekend hit, residents ventured out of their warm homes to embrace the snow that fell as low as 400 metres above sea level.

Mt Macedon attracted hundreds of people, with many families playing at the base of the mountain on Sunday.

Georgina Dymock, of Hidden Valley, brought her family, including their dog, out with their toboggan.

“I woke up on the Sunday morning and when I saw photos on social media of how great the snow looked, I woke up the kids and told them to jump in the car and we were off,” Ms Dymock said.

The child care leader said the spontaneous trip was a great day for memory making with her family.

“It was a perfect Sunday, it gave local kids the chance to see and play in snow,” she said.

But it wasn’t all fun and games, police, VicRoads and State Emergency Services rushed out to close Cameron Drive, Barringo Road and Lions Head Road in Mount Macedon, with black ice causing car accidents on the steep and slippery.

Sergeant David Arnold, from Gisborne Police Station, said a huge number of cars were slipping, sliding and smashing into objects next to the road – leading to the five hour road closure.

“There was a concern for everybody’s safety – luckily there were no injuries, but there was a considerable amount of property damage to drivers’ cars,” Sgt Arnold said.

“We would advise – if you’re not used to those conditions, you should park your car safely at the base of Mt Macedon and walk up.

“Drivers were not prepared and didn’t have the appropriate gear like snow chains.

“Police members even in our vehicles weren’t willing to go up there.

”Macedon Ranges Towing reportedly volunteered by pulling vehicles out of the snow.

The cold front moved north east to NSW and the ACT over the weekend – bringing snow for the first time to towns in decades.

Army on display at Puckapunyal