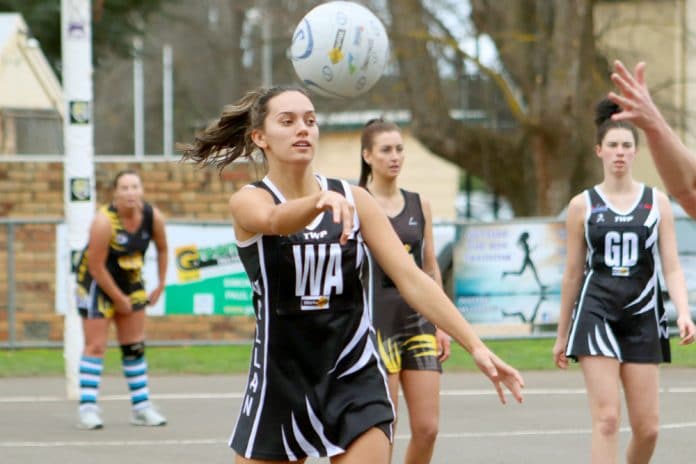 After getting out to an eight-goal margin at half-time, the Kangaroos were able to hold their lead throughout the second half and win comfortably.

Shooters Toni Bootland (23 from 27) and Kate Berger (19 from 24) shot the lights out for Broadford while goal keeper Michelle Williams and goal defender Amanda Rothwell-Hiscock were among best on court.

The defender held the Blues’ shooter to just 67 per cent shooting.

In other Riddell District Football Netball League A Grade matches, Romsey held its place in the top four with a 61-38 win over Woodend Hesket.

After opening up a seven-goal lead at quarter time, the Redbacks only missed two more shots at goal for the entire match.

Sharing the scoring load, Chelsea Ross led the side with 25 goals from 26 shots, while Rebecca Hicks (21 from 22) and Hope Evans (10 from 11) also made strong contributions.

Stefanie Symes and Christie Brinkhuis were named alongside Ross as Romsey’s best on court.

Wallan is in a good position ahead of the finals after an 83-24 win over Lancefield.

The Magpies were in control from the get-go, leading by 13 at quarter time. The punishment continued as the lead ballooned to 31 goals at half-time.

Wallan added 22 goals in the third quarter and 21 in the last to cruise to victory.

Chloe Meulenmeesters led the Magpies with 65 goals from 84 shots while Jordan Furness led the Tigers with 12 goals from 17 shots.