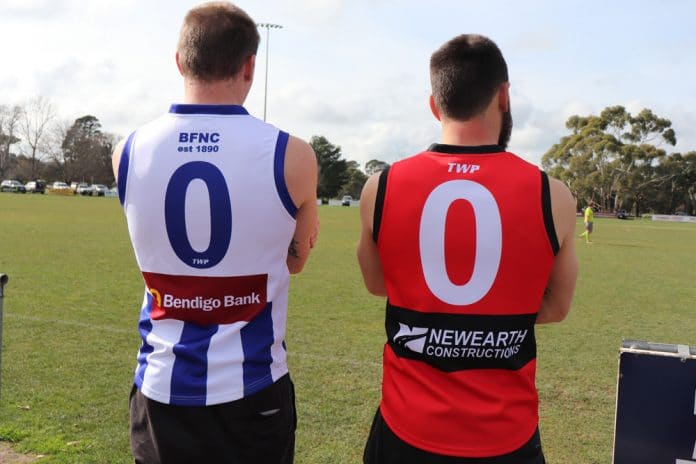 Captains from the Riddell and Northern football leagues will be among more than 1000 to swap their regular jumper numbers for number zero to promote the Transport Accident Commission’s Towards Zero Round.

For the first time in the TAC’s 28-year-long partnership with AFL Victoria, the TAC is co-ordinating a state-wide round for all grassroots football and netball clubs this weekend.

Through the TAC’s partnership with AFL Victoria, the Towards Zero Round will enable the TAC to share the message of road safety with more than 400,000 Victorians who are involved in sporting clubs across the state.

The round will see more than 1000 football captains, as well as other players, wearing the number zero on their backs instead of their usual jumper number.

VFL, VFL women’s, netball players and junior footballers will also be involved in the initiative, with TAC rolling out a range of additional activities throughout the weekend.

“You wear zero and everyone notices it’s different so a lot of people ask you what it’s for and it just gets the word out there and gets people thinking about it,” he said.

Broadford captain Jayden Welch said country football and netball players were as aware as anyone about road safety with the long drives they often have to away games.

“On the roads, you’re pretty liable for what can happen to you and it’s a pretty bad thing that can happen so it’s good to get awareness around the subject,” he said.

“It’s an honour to put the number zero on. I’ll put the 15 away next week and chuck the zero on.”

Alarmingly, 165 Victorians have already lost their lives on the roads this year, an increase from 104 at the same time last year, a 56 per cent jump.

Tragically, 95 of the deaths have occurred on regional roads, compared with 52 the same time in 2018.

The Towards Zero Round is a new approach by the TAC and AFL Victoria to engage the community and increase awareness about critical road safety issues.

As part of this initiative, the TAC has also invested $300,000 in a Community Grants Program, where clubs will have the opportunity to apply for grants of up to $10,000.

TAC acting chief executive Bruce Crossett said the Towards Zero Round aimed to highlight the real value of reaching zero deaths on our roads and why it was something all Victorians should be working towards.

“Grassroots football and netball clubs are the life blood of their communities and I’m sure you would be hard pressed to find someone involved who hasn’t been affected by road trauma,” he said.