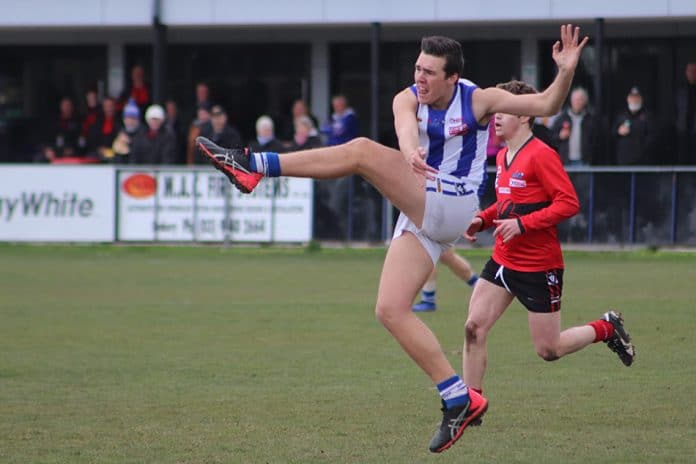 Romsey bounced back from last week’s loss with a huge 176-point win over Broadford at home on Saturday.

The win keeps the Redbacks at the top of the Riddell District Football Netball League ladder and gives them some breathing room with a 25 percentage point margin over Riddell.Romsey got the ball rolling immediately, kicking the first eight goals of the game to take a 53-point lead into quarter time.

Broadford was able to break its drought in the second term, kicking two of their three goals for the match, while the Redbacks added another eight goals to break the 100-point mark before half-time and extend their lead to 91 points.

Romsey held the Kangaroos goalless in the third term and booted another eight goals to blow the lead out to 140 points at three-quarter time.The Redbacks strolled home with a six-goal to one final term.

Romsey coach Corey O’Sullivan said it was good to see the Redbacks get back to playing good footy and enjoying it.

“The boys were fired up to get back to what we do well. We probably haven’t had a good last six weeks and hit a flat spot but hopefully we’re back up and going again,” he said.

“Ben Way had missed seven weeks of football and his first game back was last week against Riddell, which was tough for him, but on the weekend he was exceptionally good and it was good to see the big fella back in some form.”

Romsey will look to carry its momentum this week when its facec Woodend Hesket in Woodend.

“We know Woodend is going to be a very difficult game. They’re going in with nothing to lose and when teams have nothing to lose, they’re very dangerous,” O’Sullivan said.

“They’re going to want to knock us off going into the finals but we have to make sure that doesn’t happen.”

For the Roos, its another away game, this time at Melton Centrals.