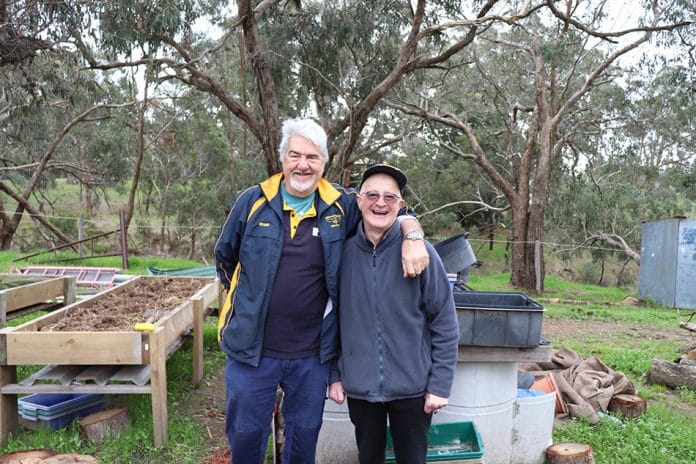 IF Bill Moore hadn’t decided to come into Kilmore Men’s Shed one afternoon in May this year – he may not have survived a massive heart attack that took place near quick-thinking friends.

Mr Moore was standing with his mate Roger Stewart in the garden near a shed when he suddenly collapsed.

“I just slumped on Roger and he helped me down to the ground,” he said.

Mr Stewart called out for extra help and an ambulance was called. Shortly after another men’s shed member Allan Kosmer ran over to perform CPR on Mr Moore.

“I was sitting in the garden area when my ears pricked up – someone needed help so I ran over to see lots of people crowding around Bill on the ground,” Mr Kosmer said.

“We could see the obvious signs of cardiac arrest, I’ve known CPR since primary school and had prior experience performing CPR in 2012 on a colleague – so I got on with it.”

A day later, Mr Moore woke up in Northern Hospital.

“When I woke up, I thought, what happened? I didn’t see any lights, footpaths or the pearly gates,” Mr Moore laughed.

The men’s shed member said he was lucky to come away from the experience with no brain damage.

“Allan did such a good job on me until the ambulance arrived – I was walking around three days later – even the cardiologist was surprised,” Mr Moore said.

“I was very lucky to have Roger and Allan there.

“If I hadn’t come in that day, my partner would have found me dead in our home.”

It wasn’t the first brush with a near-death experience either, Mr Moore said he had another heart attack 14 years ago, and a car accident 18 months ago that left him and his partner in hospital for three months.

“You sort of think, goodness me – I’m very lucky – seems like a man has three lives,” he laughed.