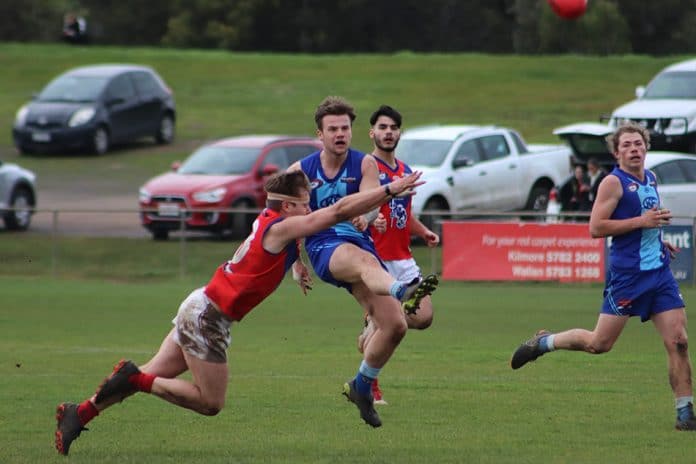 Mernda’s march towards a place in the Northern Football Netball League division three finals continues on after an eight-point win over Kilmore at JJ Clancy Reserve on Saturday.

The Demons set the tone in the first term, kicking four goals to one to take a 17-point lead into quarter time.Kilmore replied in the second term, kicking three goals of their own and holding Mernda to just one to close the game to four points at half-time.

Both sides picked up the pace in the third term as Mernda extended the lead out to eight points with a four goal to three quarter.

Kilmore and Mernda traded goals throughout the final term, but the Blues weren’t able to reel in the Demons.Kilmore coach Nathan Phillips said the Blues couldn’t afford to lose such important games.

“It was disappointing to lose that. Mernda had to win to stay alive and credit to them, they got the job done. They played harder for longer and got the win,” he said.

“The boys are very disappointed and very keen to bounce back.”We’re hoping to get some players back next week but we can’t make excuses for performances like that.

“Two weeks in a row we’ve started flat and lost two close games. Had we started right and been focused from the start, it could’ve been a different story.”

The win moves Mernda up to fifth on the ladder with a 7-6 record after Heidelberg West’s loss to Panton Hill.

The Demons are now just a game behind fourth-placed Kilmore, who dropped a spot after South Morang’s win over Reservoir.

“Heidelberg West are a couple games off but we’ve got to win at least two of our last three to be anywhere near guaranteeing ourselves a top four spot, so it’s another big week and big game for us,” Phillips said.