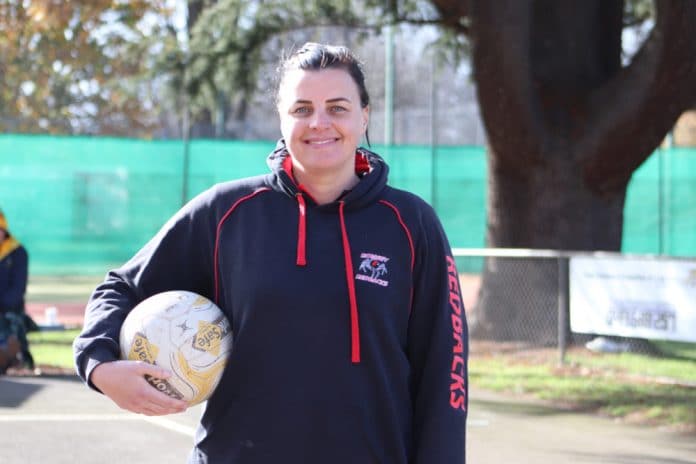 Romsey netballer Hope Evans celebrated her 350th game the right way on Saturday with a 35-30 win over Riddell in their B Grade match.

Evans, pictured left, has played 200 games for the Redbacks after starting her career with Seymour Lions in 1997 before moving to Romsey in 2010.

She said she had been really fortunate to play for the Redbacks.

“I’m so grateful to have met the people I have since playing at Romsey. It’s a great community to live in and a great club to be involved in,” she said.

“We’ve had some players come and go but we’ve been really lucky to be as successful as we have in the last 10 years and to be a part of that is something that I’m really grateful for.”

Evans said the highlights of her career were the A Grade premierships she had won with Romsey.

“In 2010, we were a brand new team thrown together and that was the first year I played with Romsey so I met a whole new group of girls,” she said.

“We tried to gel and took our time and things just built up to the point where we were in finals and did really well.”

“The 2013 premiership was one of my bigger highlights. Finishing fifth in the home and away season, we peaked quite late in the year and coming into the finals.

“We thought we have to give it everything we could and we did.

“We knocked one team off after another and ended up having a really strong grand final and to come away with that win was the best given where we’d finished.”

Evans said she ranked her 2015 player of the year award as her greatest individual achievement.

“I wouldn’t have considered it one of my strongest years and the thoughts were going through my head of maybe I’m slowing down or losing it but I was awarded player of the year that year, which was really quite a surprise,” she said.

Evans said she wanted to thank the club for all their support over the years.

“They’ve been a really good support for me. They’ve been wonderful not only to myself, but my family. Very welcoming and they’ve always been a big part of our lives since starting here.”

Netballers ready for the new season