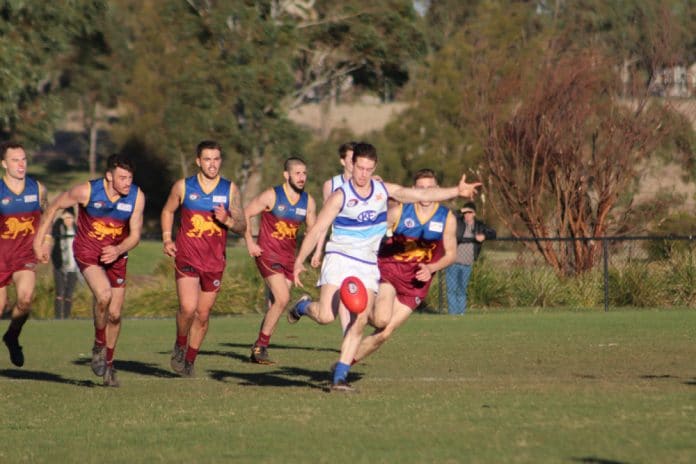 South Morang closed the gap on Kilmore to just half a game on the Northern Football District League division two ladder after a 17-point win over the Blues on Saturday.

Kilmore are third on the ladder at 8-4, two games behind Panton Hill and only a draw ahead of South Morang.

It was a topsy-turvy game but it started slow as the two sides were only able to kick a goal each in the first term as the Blues held a one-point lead at quarter time.

South Morang got the first blow in the second term, kicking five unanswered goals while holding Kilmore scoreless and take a 32-point lead into half-time.

The Blues came out of the sheds for the third term like a house on fire, booting seven goals to one to lead by 10 points at three-quarter time.

Kilmore wasn’t able to carry that momentum forward as the Lions chipped away at the lead in the final term, kicking four goals to none to steal the win.

Kilmore coach Nathan Phillips said it was disappointing to drop a winnable game.

“We’ve got to win games like that if we want to compete come the end of the year. There’s still a lot of footy to be played so we want to win those games” he said.

“Our second half was good but we were horrendous in the first quarter, we didn’t use that breeze at all.

“We can’t give sides a chance like that and expect to win. They played well with the breeze and we could’ve defended better but the first was the quarter that really hurt us.

“Leigh Irons was really good all day through the midfield and Ben Cooney kicked all his goals in the third quarter. Paxton went into the ruck in the second half and gave us lots of opportunities.”

The Blues host Mernda this weekend with a chance to solidify their place in the finals.

“Every game we’ve played in the last four weeks has been pretty important and this is another one,” Phillips said.

“We need to win this one, we’re not guaranteeing ourselves a spot but it helps if we win this one.

“We’ve got the toughest run home so we’ve got to play our best footy and that’s what we need to do anyway if we want to compete against the top sides if we make it.”